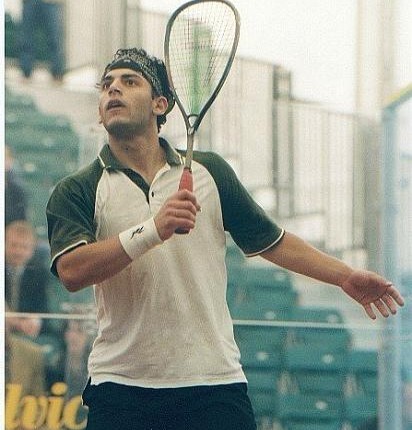 In any discussion about squash in Egypt, the name of Ahmed Barada will surely pop up in conversation. Barada, 39 and now retired, is considered the motivation and inspiration for the majority of current Egyptian squash champions, who together have made Egypt one of the most advanced countries in squash.

Egyptian and international squash champion and ranked fourth internationally, Omar Mosaad, previously told Daily News Egypt: “When I started playing squash, the Al-Ahram International Squash Championship was on and famous Egyptian squash players were competing, including Ahmed Barada and Amr Shabana. I think it did not only inspire me, but also the majority of Egyptian squash players from my generation, including Ramy Ashour, who is ranked fifth internationally, Mohamed El-Shorbagy who is ranked first as well as Raneem El-Welily and Omneya Abdel Kawy.”

In 1996, Barada came in second place at the Al-Ahram International Squash Championship, which used to be held in Cairo. He lost the final to Pakistan’s Jansher Khan with scores of 15-4, 15-11, 15-8, and a final score of 3-0. Khan was ranked first internationally in 1988 and is seven years older than Barada.

1998 was a fruitful year for Barada as he won the Al-Ahram International Squash Championship and, that December, he was ranked second internationally.

In the Professional Squash Association (PSA) 1999 Men’s World Open Squash Championship, Barada won silver. This championship was held in Cairo, and gold  went to Scottish player Peter Nicol, who would become Barada’s long-time professional rival. In the final match Barada lost to Nicol with scores of 15-9, 15-13, 15-11, and a final result of 3-0.

In the same year, at the 1999 Men’s World Team Squash Championships, which also took place in Cairo, Barada was a member of the Egyptian team which won gold. The runner up was the Welsh team.

That same year, Barada was stabbed twice near the spine by an unknown assailant.  Though he did recover from the injury, he only resumed playing squash for a short period and the Egyptian squash star retired in 2001. He then launched his singing career and went on to star in the Egyptian film Hob El-Banat, alongside some of Egypt’s most famous actors.