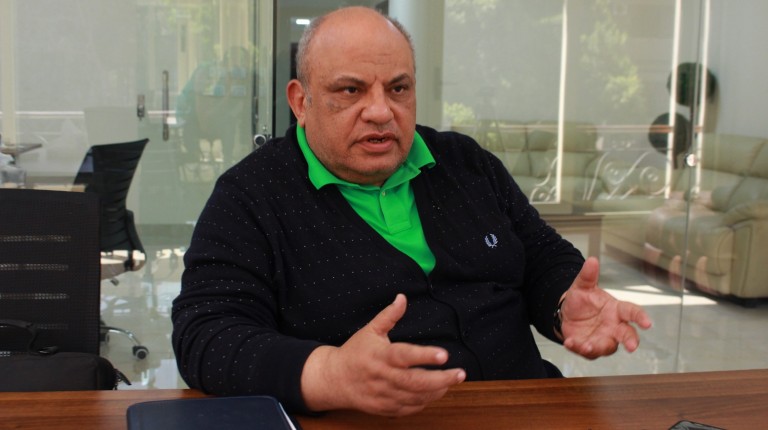 As the long-awaited El Gouna International Squash Open unfolds in the resort town north of Hurghada, Daily News Egypt speaks to Assem Khalifa, the head of the Egyptian Squash Association, to discuss the association’s role in the championship, and the future of squash in Egypt.

What role does the Egyptian Squash Association (ESA) play in the 2016 El Gouna International Squash Open?

The association supervises the championship. It is in charge of providing the technical staff, and it operates as the mediator for all things related to squash in Egypt. It is responsible for providing the arbitrators, and facilitates the procurement of required authorisations.

As for El Gouna’s squash tournaments, it is promoted by Amr Mansi, the founder and CEO of IEvents, who is responsible for organising El Gouna’s tournaments. The main sponsor is Orascom Telecom Media and Technology.

How do you select the judges for this championship?

The foreign judges are nominated by the World Squash Federation (WSF). From our side, we offer them plane tickets and accommodation.

The number of judges depends on the size and the requirements of the championship.

What countries do the judges of the 2016 El Gouna Open come from?

There are of various nationalities, including from the UK, the US, Hong Kong and Africa.

Would it not have been less costly to have Egyptian judges, rather than fly foreigners in?

Any championship organised by the WSF or the Professional Squash Association (PSA), should include various nationalities, and cannot include judges from the host country alone.

In smaller championships, to mitigate the costs for the committee responsible for the organisation, the committee is free to select judges from its own country. This is not the case in the El Gouna championship, as it is very important, and highly qualified arbitrators are needed.

Squash nowadays has developed to the point that it requires a fourth judge during the match.

What is the role of a fourth judge?

What are your expectations for the 2016 El Gouna open?

I expect great success for the tournament. Competitions will be strong and on a very high-level, as international squash champions are participating.

Keep in mind that, for international squash champions, in order to improve their world ranking, El Gouna’s tournament is very important.

Do you think organising championships such as El Gouna could benefit tourism in Egypt?

Benefiting tourism in Egypt through these prestigious championships is at the top of our priorities. In cooperation with Al-Ahram, we will resume the Al-Ahram Squash Championship, at the Pyramids of Giza, next September. Of course this will have a very positive influence in favour of tourism in Egypt.

Do you fear the possibility of attacks during these tournaments?

After the El Gouna tournament, what is the next important squash event that Egypt will host?

The World Squash Championship for Individuals will be held in Egypt this year, at Wadi Degla Club.

Squash has gained a lot of traction in Egypt, but globally tennis remains the more popular sport. Why do you think this is?

To be honest, we do not have outstanding tennis players, excluding Ismail El-Shafei and a few other young players. Even so, these young players have not achieved special victories. Squash’s standing in Egypt is excellent, and far exceeds that of tennis.

King Farouk assigned Abdelfattah Amr as the ambassador of Egypt to the UK, and offered him the title of “Bek”. Amr is considered the first truly dominant squash player in Egypt.

Do you think the advancement of squash is linked to Britain’s colonial history in Egypt?

Can you give brief on the financial support the association provides to squash players?

We earn about EGP 3-4m annually. The association includes a management board with several specialties, including two engineers, a doctor and an accountant. Mohamed El-Menshawy also joined as he is one of the WSF’s vice presidents and we can learn from his experience.

At Al-Ahram, I learned all about sponsorship, management and event management. Al-Ahram also put a spotlight on the sport a long time ago.

Our strategy includes tools that we apply to achieve certain goals.  Every quarter, we manage the accounting.

Leading up to major championships, we offer monthly allowances to players to help them with their expenses; however, this is not permanent.

There are many expenditures involved in playing squash. How is this addressed when a player from a lower-income background wishes to practice the sport?

To practice the sport, a player only needs suitable shoes, clothes and a racket at a reasonable price. It is only when the player reaches the professional level and starts to participate in championships that he/she would need to spend a lot of money on the sport. For example, a professional squash player needs a coach for the sport, a fitness trainer, a comfortable racket and shoes, among other things that may rack up expenses.

Keep in mind that not everyone who practices sports has to be a champion. If just 1% or 2% of all squash players in Egypt manage to reach championships, that alone would be great.

Where in Egypt can squash be practiced?

There are courts in Alexandria, as squash is very prominent there, although the sport is only practiced in two clubs: Smouha and Sporting. Both clubs produce high quality and quantity of squash players and figures. In Cairo, squash is practiced in the following clubs: Maadi, Gezira, Shooting, Heliopolis, and Al-Zohor, among others. Squash is also played in Tanta.

Although Cairo has more sports clubs where squash can be practiced, Alexandria turns out more squash players.

Recently, Tanta has become one of the important squash destinations in Egypt, with many highly qualified squash players. The level of the sport there is very developed.

I would prefer to improve the existing courts, rather than establishing new ones in other places where inhabitants are not familiar with the sport. However, we have built a squash court in Gezira Youth Centre, as many young people frequent this centre, out of which we can establish a very good squash school.

When did Tanta start to acquire this status in the sport?

About six or seven years ago.

Do you expect that squash will continue to be highly successful in Egypt in the future?

According to the strategy we have adopted, we are committed to maintaining this level in the sport, which guarantees that Egypt will always have the best players worldwide, both juniors and seniors, who can achieve international titles.

All this depends on policies that we set and apply in cooperation with the Ministry of Sports and Youth Affairs and the sports clubs. Our policies and strategies proved their success in the previous years and I hope this continues in the upcoming years.

We have to be prepared, as in future years other countries will contest Egypt’s dominance in squash victories.

What role can the state play in improving the sport?

When we arrange meetings in the association, we do not play squash; we set plans in order to reach certain goals. The government helps us achieve these goals.

To apply criteria for developing squash in Egypt, imitating other countries is not a solution, as we are not the same as the US, the UK or Germany. Therefore, our criteria need to be creative and we cannot always blame the state.

Is squash appreciated as a sport on an international level?

Of course, nowadays it is developing, spreading and becoming more popular. Moreover, the number of countries with audiences of squash fans is increasing worldwide.

Why is it still not considered an Olympic sport?

We cannot deny that politics is involved. Do you think it makes sense that boxing would enter the Olympics, exit, then enter again?  It is not common for any sport to enter and exit the Olympics.

As Egypt generally has the best squash players in the world, would you not like to see squash included in the Olympics, and in turn for the Egyptian players to score Olympic medals?

Of course I do, and it bothers me that it is not included as an Olympic sport.

Keep in mind that there are also interests involved. To simplify, I will give you an example—the country that hosts the Olympics has the right to add a sport. In 2020, Japan will host the Olympic Games, and imagine that they have to select between squash and karate. Which sport would they choose? Karate, of course. They will choose the sport in which their national champions can score medals.

Who do you think can push for including squash in the Olympics?