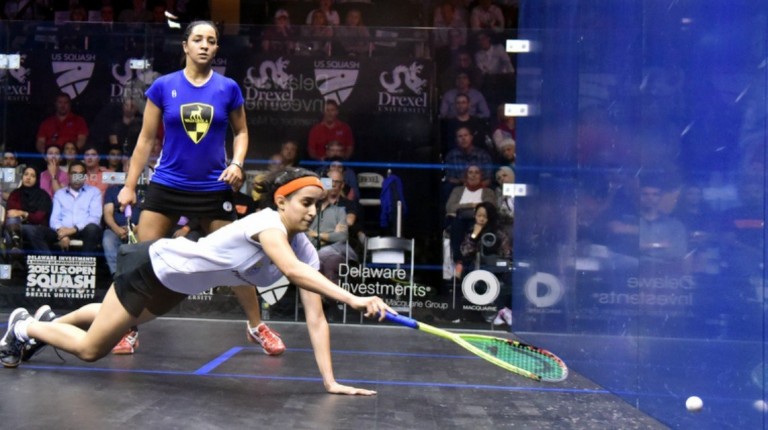 Having kicked off a skyrocketing career in squash at the tender age of 10, Nour El-Tayeb has joined the ranks of Egypt’s top tier of squash players, who continue to occupy the top rankings in the sport year after year.

Daily News Egypt spoke to El-Tayeb about her career, why she chose this sport, and her thoughts on other players.

When did you start playing squash?

My father, Mohamed El-Tayeb was a squash player. I used to join him while he was training. I started when I was five years old.

How did you reach your current position in squash?

This is because I love squash. I even have two sisters, Nada and Yasmin, who played squash, but they did not love the sport enough, so they did not complete. A punishment for me, when I was young and misbehaved, was to prevent me from going to squash training.

Did you try to play other sports when you were young?

Yes, from age five until I was about eight or nine, I also partook in swimming, gymnastics and basketball. Squash, however, was the sport I most enjoyed.

When was your first victory?

It was during the El-Shams Club National Championship. I was about 10 years old and I won. Before this championship I would usually end up in second or third place. It was a good start for my sports career.

What was your first international championship?

It was the 2005 British Junior Open Squash Championship. I participated in the under-13 female division, as I was 11 years old, and I won in this division.

Tell us why this championship is so important?

What were your results at the World Junior Squash Championships?

El-Sherbini is two years younger than me, but her age does not reflect her level in the sport, as she is very competent.

How many victories did you manage to secure in the British Junior Open Squash Championships?

Did you participate in the Windy City Open Squash Tournament?

What other victories are you proud of?

The first was in 2010; I won the final against France’s Camille Serme. I am very proud of this victory for two reasons. The first is because Serme was ranked seventh or eighth internationally at the time, while I was ranked 40th. The second reason was that it was the first time for me to win a non-junior championship.

My second victory was during the Ireland Squash Open Championship, in 2011. I won the final against New Zealand’s Jacqueline Hocks. At the time, it was the longest match in squash history for women, as we were both intent on winning.

The third championship was in Alexandria in 2011.

What other significant victories did you secure?

I reached the final in three international prestigious championships. In the US Squash Open, held in October 2015, I lost the final to English Laura Massaro.

In 2014, I reached the Malaysian Squash Open final, where I lost to Raneem El-Weleily. The same year, I qualified to Hong Kong’s Squash Open’s final, but lost to Nicol David.

What championships are you participating in next?

I am participating in the 2016 Women’s World Open Squash, to be held in Malaysia. Other Egyptian champions are participating, including Raneem El-Weleily, Nour El-Sherbini, Omneya Abdel Kawy and Nouran Gohar.

In the qualifier match, if I win, I will play against Amanda Sobhy, who is currently ranked seventh internationally. If I win, I will qualify to the quarter finals, where I will have the chance to face off against Raneem El-Weleily.

If I am lucky enough to reach the semi-finals, I will have the chance to play against either Laura Massaro or Omneya Abdel Kawy.

Does this mean you will not face off against Nicol David?

Well, recently Nicol David failed to win the last five or six championships. In these championships, she easily lost to Nour El-Sherbini.

El-Sherbini will play against David, and I think the victory will go to El-Sherbini, so I doubt I will meet David.

What are your most recent achievements?

I won the National Squash Championship, women’s division, while Omar Mosaad won the men’s division. It was celebrated at the Cairo Stadium. In the final match, I won against Raneem El-Weleily. Mosaad defeated Zahed Mohamed in the final.

So, it can be said that Heliopolis Sporting Club (HSC)’s players stole the show during this championship?

Yes, as Omar Mosaad and I play for HSC. I am very grateful, as I am the first female player from HSC to win this championship in a long time.

Which male squash players have stood out recently, in your opinion?

You previously said you suffered an injury last October; can you tell us more about it?

About a week after this championship, I travelled to France for a surgery, as I suffered a tear in the labrum, which required surgery. I had to rest for two months. Afterwards, when I checked with the doctor, I was allowed to resume light activities.

What was the first tournament you participated in after the injury?

I registered in the 2016 Allam British Open, but I bowed out in the last week, as my shoulders were still aching.

My first championship afterwards was HSC’s Squash Championship. I expected to lose, as I have been outside the court for a long time, but I won this championship, after defeating Mayar Hany in the final.

Can you name a player you particularly enjoy playing against?

Raneem El-Weleily, as her performance makes our matches very interesting. Another thing is that she is respectful on the court, whether she wins or loses. She is currently playing for Wadi Degla Club. When she was playing at the HSC, I used to play with her and she used to give me useful advice.

Who is your idol in the sport?

An Australian squash female player called Rachael Grinham, who lived in Egypt 10 years ago. She used to play at HSC. Since I was 10 years old, I would watch her while she was playing and also used to play with her. Other Egyptian and international squash champions, including Ramy Ashour, also used to play and train with her.

What I like about her is that, despite being the world number one in 2005 or 2006, she was very modest and her performance was great. I believe playing at HSC helped her jump to become ranked the first internationally.

Afterwards, Raneem El-Weleily became my idol. El-Weleily as well, despite the high ranking she acquired in the sport, is very humble.

If squash is included in the Olympic Games, Egyptian players can bring home many Olympic medals. What is your view on this issue?

We all think about this issue. The World Squash Federation (WSF) has tried many times to include the sport among the Olympic sports, but has failed so far. The International Olympic Committee (IOC) is the entity responsible for approving the sports that enter the Olympics; however, and politics are somehow always involved.

Squash has been practiced for a very long time and it is an old sport. I am convinced that there is definitely a way for the WSF to include the sport as an Olympic one.

Can the media play any role in including squash as an Olympic sport?

Squash is developing and spreading via the media, and this is very important to include the sport as an Olympic one.

Are you satisfied with media coverage of the sport?

In this regards I feel that it is improving—for example BeIN sports is eager to broadcast squash matches. The path is somewhat slow, but it is getting better.

What about the Egyptian media’s coverage of the sport?

As Egyptian players, especially in squash, are achieving great results, the Egyptian media is focusing more attention to the sport. This was reflected when the prominent TV host Lamis El-Hadidy hosted Mohamed El-Shorbagy, RamyAshour, Raneem El-Weleily, and Nour El-Sherbini in the past three or four months.

Of course, I would like to see better results, better coverage, and more attention given to the players, as they do with the football figures, in order to attract more sponsors to support the sport and its players. We should utilise the fact that Egypt has the best squash players.

Do you think that Egypt will be able to maintain its level in squash?

As the new generation of squash players is witnessing the success of the current generation in the sport, I do believe that Egypt will maintain its position in the future.