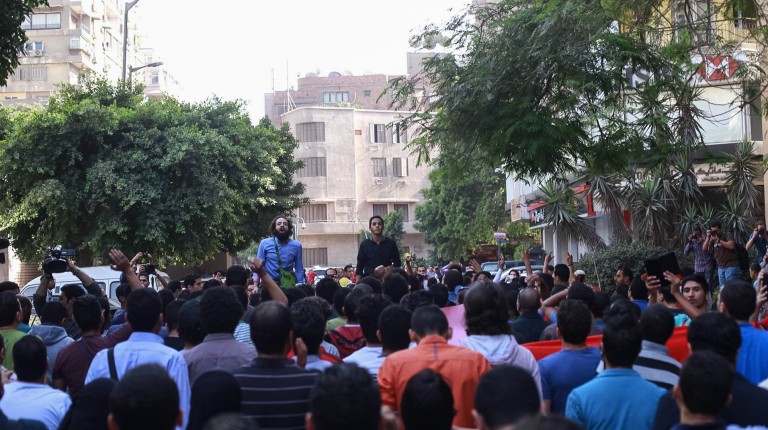 Qasr Al-Nil Prosecution ordered the detention of 52 protesters on Wednesday pending investigations and awaiting information from the National Security Apparatus on charges of participating in Monday’s protests against the maritime demarcation agreement that would transfer Egypt’s sovereignty of Sanafir and Tiran islands to Saudi Arabia, according to state-run newspaper Al-Ahram.

At least 300 protesters were reportedly detained during the 25 April protests after police forces dispersed protests in Dokki and other districts with force. This was followed by random arrests of bystanders without any investigations, according to numerous testimonies in a statement issued by Democracy Indicator on Tuesday.

Detainees were arrested on charges of illegally protesting without a permit from the Interior Ministry, disrupting roads, and causing public unrest.

“There is still no accurate census of released detainees who were arrested during Monday’s protests. All we have are statistics of official prosecution notifications: 86 people in Dokki, 25 in Agouza, 10 in Boulaq, 7 in Aswan who are detained for 15 days pending investigations, and 52 in Qasr Al-Nile prosecution,” member of the Freedom of the Brave campaign Khalid Adel Hamid told Daily News Egypt on Wednesday.

Several media reports and testimonies issued by social network activists on Tuesday evening indicated that 21 people were released from Dokki police station, after their arrest on Monday. All aforementioned numbers of detainees are being transferred daily to two prisons along the Alexandria-Cairo desert road, Hamid said.

Nine girls were reportedly detained on Monday at Qasr Al-Nile police station, according to lawyer and ex-presidential candidate Khalid Ali who wrote their names on his official Facebook page.

According to the Front of Defence for Egyptians Protesters (FDEP), the National Security Apparatus ordered the release of six of the girls but three are still being detained at the police station pending investigation.

At the time of publishing, the Interior Ministry has not clarified how many detainees have been released nor the status of the three girls who remain in detention.

On Tuesday, the prosecution renewed the detention of three people who were arrested from their homes at dawn on Monday ahead of the 25 April protests.

The family of murdered Italian student Gulio Regeni has expressed their intense anger regarding the chairperson’s detention as Abdullah was their legal counsel in Egypt.

The prosecution renewed the detention of two other activists, Ibrahim Tamer, known as “Bebo”, and Mohamed Mamdouh for 15 days.

Bebo is a mechanical engineering student at the American University in Cairo (AUC), and is part of the Boycott, Divestment and Sanctions (BDS) movement at AUC. Mamdouh hosts a satirical politics show called ‘Meen Dah’ (who is this) on a Facebook page.

Lawyer at the Association of Freedom of Thought and Expression (AFTE) Mohamed Hafez told Daily News Egypt that Mohram Bak prosecution has renewed the detention of 13 detainees who were arrested during protests in Alexandria for 15 days. The thirteen are accused of attempting to overthrow the regime, demonstrating without a permit, using force and making threats of violence, and gathering crowds.

The Alexandria Security Directorate released seven other activists who were arrested prior to Monday’s protests without filing reports against them, Hafez said.

On Tuesday, the Doctors Syndicate urged Prosecutor-General Nabil Sadek and the head of the National Council for Human Rights (NCHR) to investigate the whereabouts of two doctors who were arrested while eating breakfast at a coffee shop near the Cooperation Institute on Qasr Al-Eini street. The syndicate said its lawyer had failed to provide any information about them.

According to the civil society organisation Freedom for the Brave, police officers assaulted detainees, who were arrested during protests on 15 April, in Tora prison and forced them to undress and remain naked. The officers also cut the electricity to prisoners’ cells and only gave them one blanket. On orders from the National Security Apparatus, the prison denied their families visitation rights.

Within the past two weeks, starting with the 15 April protests, 382 people have been arrested, according to Freedom for the Brave.

Several protests took place on Monday afternoon in Cairo and other governorates in response to calls rejecting the maritime demarcation agreement that would see the transfer of Egyptian sovereignty of two Red Sea islands to Saudi Arabia. Protests were met with a strict security clampdown and random arrests.