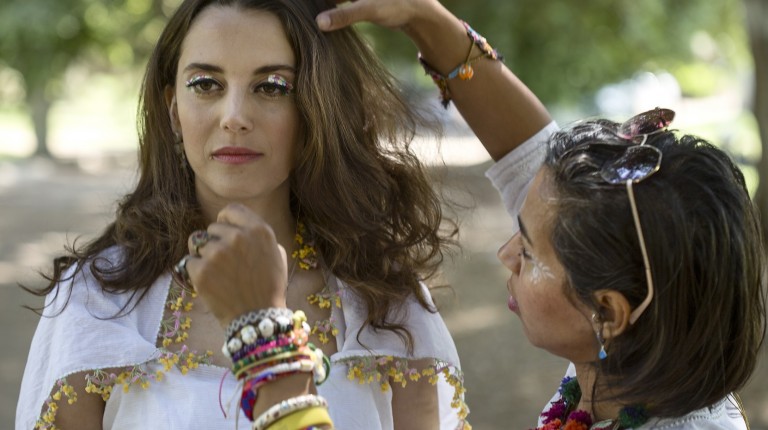 While everyone is enchanted with the glamour of technology and the mystery of the future, Menna Khalil spends her days unfolding secrets of the rarest stones and oldest books. Over the course of 11 successful collections, the jewellery designer has managed to redefine the line between jewellery, fashion, art, and culture.

“After my two previous collections, which were inspired by Radwa Ashour and Khalil Gibran, respectively, I learned that people deeply appreciated the way I link art, culture, and jewellery together,” said Khalil.

Expressing her deep admiration for another artist and creative mind became a natural theme for the designer. The spring collection is based on Monet’s art, which is referred to as the world’s greatest reference for Impressionist and landscape painting.

“The French painter Claude Monet is one of my favourite painters and I have always been inspired by him, ever since I was studying fine art. He was not just a painter he was a role model for all iconic painters,” explained Khalil. “He used to define himself as a painter for flowers. I wanted this perspective of nature and greenery to dictate my spring collection.”

Even though Khalil majored in fine arts years ago, she revisited his work in order to immerse herself in his legacy. The designer spent a month researching and studying his iconic paintings and colour pallets as well as his few documented quotes.

“Monet had many inspirational paintings. He was basically a landscape painter, which could not suit the season any better,” said Khalil.

Khalil chose three paintings to focus on in her collection, the first being Monet’s garden. “A few of the pieces include flowers and tree leaves in pastel colours,” explained Khalil.

The designer’s research yielded three key stories that she prefers to describe as musical notes that are different, yet complete each other.

“The second painting was the famous sunrise, which I have decided to mix with another that captured the sunset,” said the designer.

According to Khalil, the second story reinterpreted the sun’s daily journey through the mix of red copper and silver along with the mother of pearl, which added a touch of pastel blue.

“This particular set aims to resemble the sky’s colour in a time between dusk and twilight,” said Khalil.

As for the third and final story, the jewellery designer decided to focus on none other than the midnight lotus flower.

“My materials varied based on each story, but I mainly depended on sterling silver and copper while incorporating many rare precious stones that are hard to find in Egypt,” said Khalil.

The enthusiastic designer is known for her regular choice of rare stones. Although jewellers at times struggle to find a variety of choices, Khalil still depends on her own local suppliers that import precious stones from countries, such as India, Australia, and Brazil.

The spring collection was based on an impressive rainbow of carved Amethyst, rose quartz, citrine, and moonstone imported straight from India. “I only use precious stones because personally I am obsessed with them. I have my own stock that I have been building for 10 years, and some of my stones can no longer be found anywhere,” said Khalil.

The masterpiece collection includes 11 pieces, including three earrings, four necklaces, two bracelets, and two rings that the designer describes as her most delicate and dainty work as of today.

On the other hand, Khalil has also managed to maintain another one of her signatures: an artistic photo-shoot. The extraordinary designer purposefully strays away from commercialism. Each and every detail invested in her designs regularly showcase surprising choices.

One of the main factors she is keen to keep intact is her unusual choice of photographers. After two successful collaborations with Samo Rera and an exquisite project with Kariem El-Hayawan, Khalil’s choice to work with photojournalist Ahmed Hayman is in no way a surprise.

“Hayman had a strong vision regarding the photo-shoot. Even though his initial specialty is photojournalism, he was extremely excited for this project and he has certainly surpassed all of my expectations. It is needless to say that he is amazing with portraits and his portrayals, and no one can compete with him,” said designer.

Being an art-fuelled designer, Khalil already knew exactly what she wanted before even starting with the shoot’s preparations. The designer wanted a painting of a Parisian woman, who could have possibly inspired Monet if they were to meet.

“Nada Mozanar is a Lebanese signer that only moved to Egypt a few weeks ago. I accidently found her through a common friend that recommended her the minute he heard me describing the kind of girl I had in mind for this particular collection,” said Khalil.

Amina Metwally, a makeup artist, is another creative mind that assisted with reviving the phenomenal Monet through her simple, precise, and delicate work. With that said, the photo-shoot was executed in a historic venue that has rarely been used by fashion insiders.

“I really wanted to do the photo-shoot in a garden to capture Monet’s main inspiration. Accordingly, we did the photo-shoot at Orman garden during the current flower exhibition,” said Khalil.

As for her upcoming plans, Khalil still does not have a detailed visualisation about her next move, yet she is almost certain that summer will bring to life her long-awaited African collection.

“I still do not have a concrete outline regarding my upcoming collection; however, I am planning to visit either Cuba, Kenya, or Mexico during the coming weeks and I can confidently say that it currently seems like I will be taking a tropical detour,” said Khalil.

As for her international expansion, the designer has already been approached by many Dubai and US-based outlets; nonetheless, Khalil is currently in the planning phase as she aims to soon begin her own workshop, launch a website, and hire a team of artists to expand her work internationally.