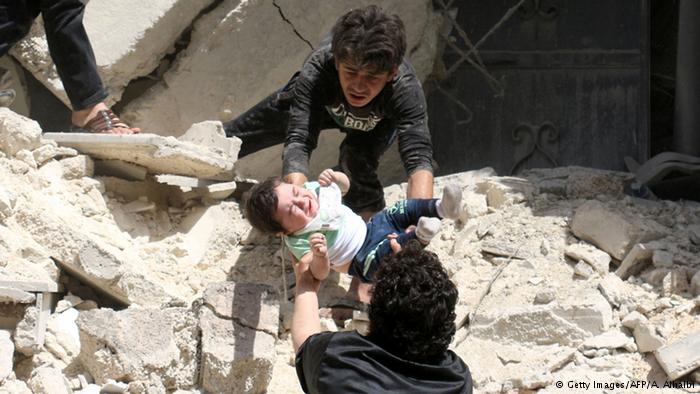 Millions of Syrians could lose access to aid, UN envoy Jan Egeland has warned. The chairman of the International Syria Support Group’s humanitarian task force told reporters that “I cannot express how high the stakes are for the next hours and days.”

“The catastrophic deterioration in Aleppo over the last 24-48 hours, also in parts of Homs area, was reported live to members of ISSG today,” Egeland said on Thursday. “No one doubted the severity of the situation,” he added, calling for access to 35 besieged and hard-to-reach areas during May.

A monitoring group and a team of first responders announced that new government airstrikes on the rebel-held part of Aleppo, Syria’s largest city, had killed 20 people and brought down at least one residential building Thursday.

Overnight, airstrikes destroyed a hospital supported by Doctors Without Borders and the International Committee for the Red Cross, killing 14 patients and medical staff – including one of the last pediatricians in Aleppo’s rebel-held areas. The head of the ICRC mission in Syria called the attack on the Quds hospital “unacceptable” and added that “sadly this is not the first time the lifesaving medical services have been hit.”

The ICRC reported that stocks of contingency food and medical aid would likely run out soon and warned that an escalation in fighting would prevent groups from replenishing them. More than half of the 200 civilians killed over the past week were in Aleppo.

“So many humanitarian health workers and relief workers are being bombed, killed, maimed at the moment,” Egeland, the UN envoy, told reporters on Thursday.

On Wednesday, UN and Arab League Envoy to Syria Staffan De Mistura said a third round of peace talks had made progress despite recent hurdles. Negotiations started again two weeks ago, the same day the regime of Syrian President Bashar al-Assad held show elections for the parliament.

At the time, de Mistura had said he hoped that the talks would allow opposition leaders and representatives of Assad’s regime to chart a political transition in the country. However, renewed violence has stalled negotiations and opposition leaders accuse the Assad government of targeting civilians even as its representatives in Geneva go through with the peace talks.

Aleppo truce extended by another 72 hours