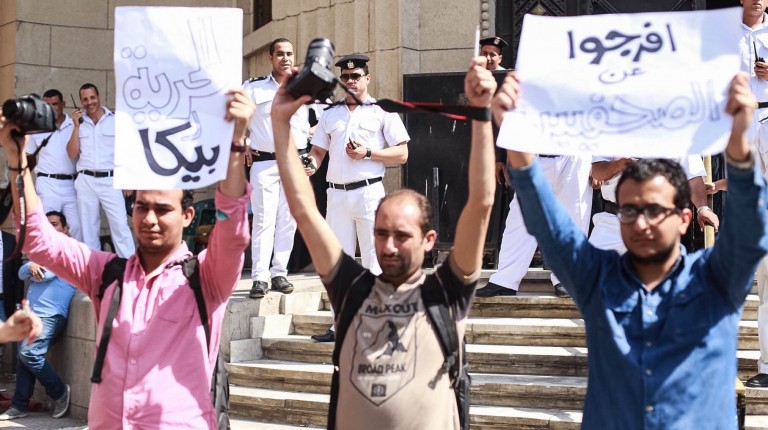 Yanair Gate’s editor-in-chief Amr Badr and journalist Mahmoud Al-Saqa have started a sit-in outside the Press Syndicate’s headquarters in downtown Cairo on Saturday to protests security raids of their private residencies at dawn on Friday.

On Friday morning, police raided Badr and Al-Saqa’s private residencies for the second time in April, attempting to arrest the journalists. After obtaining a warrant for their arrest for the charge of publishing false information, police approached the journalists’ homes on Friday at dawn. When they could not find Badr or Al-Saqa, they proceeded to search the properties.

In response, Badr announced that he and Al-Saqa would stage a sit-in in front of the Press Syndicate’s headquarters, calling on syndicate leaders and other journalists to join them in solidarity.

In his statement, Badr stated that family members called him at dawn on Friday morning to report that security forces had arrived at house with an arrest warrant.

The prosecution issued arrest warrants for Badr and Al-Saqa along with at least 47 others, according to the state-owned Al-Ahram newspaper.

Many human rights groups and activists have condemned security violations committed against journalists. Earlier this week, the Press Syndicate filed a complaint against the interior minister to protest police practices during the 25 April protests when 40 journalists were arrested, while several others reported being assaulted.

Reporters Without Borders has reported 42 journalists are currently imprisoned on charges related to normal professional duties.

Journalists held banners calling for the release of their colleagues, while chanting, “Journalism is not a crime.”

222 violations against reporters, media personnel in first 3 months of 2016: JATO