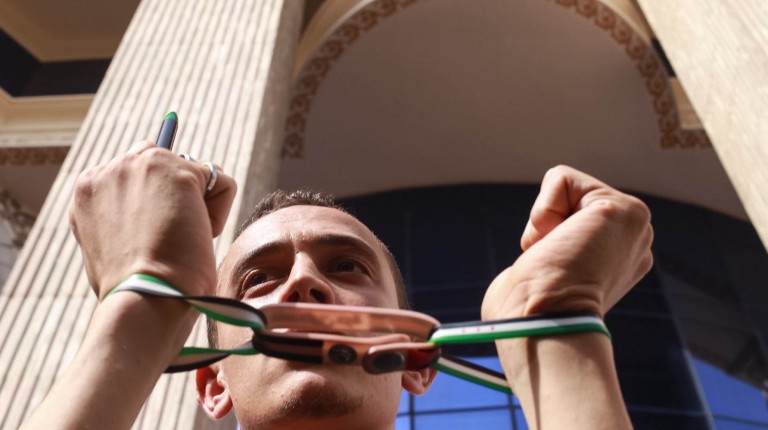 On Monday, the Shubra Al-Kheima prosecution ordered the detention of journalists Amr Badr and Mahmoud Al-Saqa be renewed for fifteen days pending investigations, following their arrest from the Press Syndicate’s headquarters on Sunday.

Badr, the editor-in-chief of Yanair news website, and Al-Saqa, a journalist at Yanair, have been charged with inciting the public to topple the regime, joining an organisation that aims to harm national unity and social peace, and publishing rumours and false news that could disrupt general security.

The prosecutor general’s office issued a statement on Monday detailing an arrest warrant that was issued against the two journalists prior to yesterday’s events.

The statement said that the prosecution was investigating nine defendants—including Badr and Al-Saqa—for incitement and issued a search and arrest warrant on 19 April.

The report stated that the defendants published rumours and false news which they used to incite demonstrations on Monday 25 April, taking advantage of the demonstrations to attack police, army forces and police stations.

The report stated that the journalists had acquired firearms and Molotov cocktails and possessed seditious leaflets to be used to execute their plan to harm national security in collaboration with other defendants, including prominent rights lawyer Malek Adly.

However, according to lawyers who attended the journalists’ court hearing on Monday, the prosecution did not address any weapons charges during the investigation.

After an emergency meeting held in the early hours of Monday morning to address security forces’ storming of the Press Syndicate’s headquarters, the Press Syndicate Council announced the syndicate’s board would stage an indefinite strike until Minister of Interior Magdy Abdel Ghaffar is dismissed from his post.

Earlier in the night, Press Syndicate head Yehia Qalash told a Daily New Egypt correspondent that a police force of at least 50 officers stormed the syndicate’s headquarters and arrested Badr and Al-Saqa.

Abu Al-Saud Mohamed, a member of the syndicates’ council, called upon newspapers to black out their front pages to show solidarity with the syndicate and their arrested colleagues.

He added that several editors-in-chief suggested putting a black ribbon on their websites, an initiative accepted and implemented by news websites like Al-Masry Al-Youm and Al-Tahrir.

Emerging from the meeting, the council announced it would hold an emergency general assembly meeting on Wednesday to discuss further measures.

However, the Ministry of Interior has stated that the two journalists “surrendered willingly”, as a police force of eight officers entered the syndicate to arrest them. The ministry added that Badr and Al-Saqa were ordered to be arrested after the prosecution accused them of incitement and attempting to distort the stability of the country. It was with the prosecution’s order that police entered the syndicate where Badr and Al-Saqa were “hiding”.

While the Press Syndicate’s Council met inside the syndicate, dozens of journalists began demonstrating in front of the headquarters, chanting against the Ministry of Interior and the sovereign transfer of Sanafir and Tiran islands to Saudi Arabia, according to a Daily News Egypt correspondent outside the building.

In a televised interview with CBC, Qalash said that the “storming is an insult to the country, and the syndicate is supposed to represent freedom and journalism”.

He added that the police could not have stormed the building without the permission of the prosecution.

Journalists have taken to social media to condemn security forces’ actions, stating that the syndicate has never been breached in the 75 years since it was founded.

Badr and Al-Saqa were taken to Shubra Police Station.

Badr and Al-Saqa began a sit-in outside the Press Syndicate’s headquarters on Saturday to protest security raids conducted at their private residencies at dawn on Friday, the second raid they had been subjected to in the past two weeks.

A Daily News Egypt correspondent reported that squads of riot police surrounded the streets leading to the syndicate, preventing anyone from entering or leaving the area on Sunday afternoon.