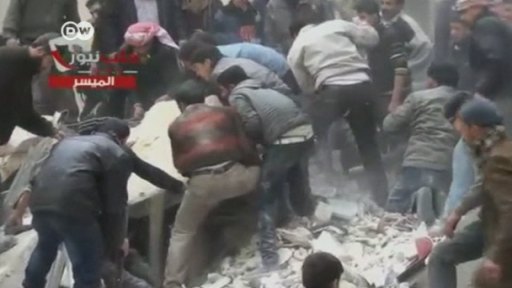 There is growing concern in Europe about the prospect of suspected war criminals from Syria entering the asylum system. Tom Rollins reports on the case of one man who says he’s been unfairly targeted.
In August 2013, a forensic photographer employed by Syria’s military police fled the country, USB sticks tucked into his clothes.

The man, now known only by his codename ‘Caesar,’ was bringing with him then the most extant evidence to date of war crimes and crimes against humanity perpetrated by the Syrian regime; more than 50,000 photographs in all.

“Before the war, it was my job to photograph crime and accident scenes involving military personnel. Suicides, for example, or drownings; traffic accidents or house fires,” Caesar remembered in a series of interviews with French journalist Garance le Caisne last year.

But after anti-government protests spread out from the southern city of Deraa in March 2011, it became clear the bodies Caesar was photographing at Tishreen and Mezzeh, two military-run hospitals in Damascus, were murders and not accidents. Bodies were badly tortured: cigarette burns, eyes gouged out, bones broken, skin bearing the marks of repetitive, brutal beatings. At Mezzeh, emaciated bodies were left out in the open in a garage next to the hospital. The images have drawn comparisons to Nazi Germany and the Khmer Rouge.

Abu Yasser, then in his 20s, was working at Tishreen at the same time, seeing through a five-year residency as a surgeon. Once the revolution began, he also supplied information to the outside world. And yet Abu Yasser is now stuck in a Swedish reception center for asylum seekers; his asylum claim rejected by the Swedish Migration Agency, his immediate future certain.

“They told me it was because I’d worked in a place where torture had been happening,” Abu Yasser told DW by telephone, “despite the fact I told them I was also a doctor that worked with field hospitals in besieged areas of Damascus.”

“I told them about torture in Syria and they used it against me.”

As a Sunni doctor, purportedly working with civilian patients, Abu Yasser says he was not party to the abuses in Tishreen. “I was a civilian doctor, not a military one, so I was not allowed to treat imprisoned patients,” he said, before referring to an area known within the hospital as an ‘alternative emergency room,’ where horrific acts of torture were reportedly committed. He claims only military staff and Alawites, the Shia off-shot to which President Bashar al-Assad belongs, were allowed in.

“I sometimes saw the injured there, the soldiers would keep them naked and blindfolded. But I only saw the effects of torture, never them actually torturing patients. I saw the wounds, trauma, marks on their bodies.”

In 2011, Abu Yasser made a list of names of doctors and nurses who were allegedly abusing patients at Tishreen, before passing it on to activists and human rights researchers. DW was able to confirm this with Human Rights Watch, who confirmed receiving information from Abu Yasser in 2011, although they were unable to cross-examine it with other sources at the time.

By 2012, Abu Yasser had left Tishreen and worked in a civilian hospital run by the Ministry of Health. He also claims he began working in field hospitals in northern Damascus to help those injured during regime sieges, raids and crackdowns on restive, anti-government neighborhoods; although it was not possible to independently verify this.

An act of principle?

What motivated Abu Yasser, principle or an act of penance? Tishreen and Mezzeh have been described as slaughter-houses and killing centers by former employees; some accounts recount doctors being forced into abusing and even torturing patients. At the same time that industrial-grade torture was happening, the hospitals were operating civilian sections that are still used to impress visiting foreign delegations. But was it really possible to turn up to work everyday and carry on as before?

“When the revolution started, I never intended to leave Syria,” Abu Yasser said. “I was helping injured people and I felt that that was my duty. But when they started arresting my friends, I became too afraid.”

“I felt the regime must have known about who I was working with. That’s when I decided to leave.”

Now in Sweden, Abu Yasser is waiting for the Migration Agency to re-assess his asylum claim, part of the standard process when an asylum seeker appeals a rejection decision.

But his experience speaks volumes of Europe’s growing concern about the movement of small numbers of suspected war criminals from Syria into the European asylum system. Former combatants, as well as individuals who committed war crimes or crimes against humanity, are meant to be excluded from the 1951 Refugee Convention.

In January, a Norwegian police official said they were investigating around 20 individuals from Syria. Germany, the country to have received more asylum seekers in 2015 than any other European country, is also looking into more than a dozen cases, a spokesman for the Federal Criminal Police Office (BKA) told DW.

Sweden, like countries across Europe, has already seen a handful of cases brought against asylum seekers accused of committing war crimes back in Syria – including a former Free Syrian Army fighter who was sentenced to five years’ imprisonment after a video surfaced on Facebook of him torturing a Syrian man. In February, 31-year-old Syrian asylum seeker Mohamed Abdullah appeared in court accused of war crimes, although he was later released due to a lack of corroborating witnesses.

Prosecutor Reena Devgun, who works with war crimes at Sweden’s International Prosecution Office in Stockholm, said that last year’s record influx of Syrian refugees made it increasingly “important to make sure that these refugees are not followed by war criminals.”

“[Refugees] come to Sweden to seek refuge,” she said. “So in Sweden we find it’s our responsibility to make sure that they have that, and also that there’s no impunity for war criminals or suspects in these crimes.”

Sometimes information about these suspects come to the authorities through Migration Agency reports; other times from within the Syrian diaspora itself. Devgun said that the Migration Agency and security agencies had “enhanced [their] cooperation” to better look out for suspects.

Abu Yasser maintains his innocence. He believes that speaking the truth turned him into a suspect – and suggests many more arrive in silence about the things they saw, or actually did, back in Syria.

“You know why this happened to me?” he asked. “I spoke the truth. Most people here just say, ‘I don’t know anything.’ But I spoke the truth – I spoke about torture in Syria.”