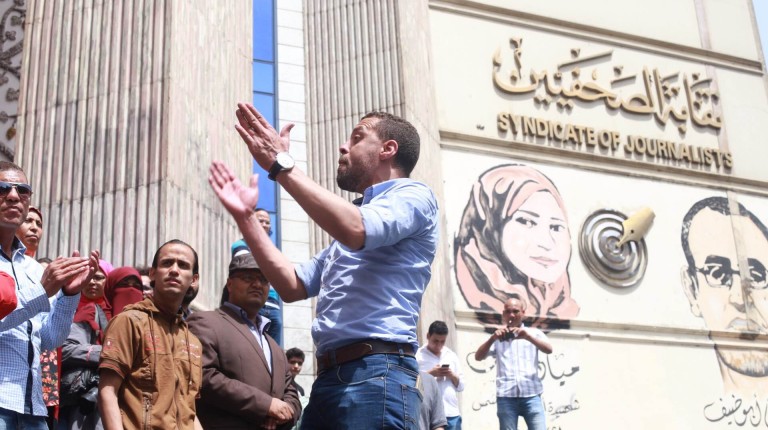 The US State Department issued a statement on Monday urging Egyptian the leadership to “uphold the people’s basic rights to freedom of expression”.

In a press briefing in Washington DC, state department spokesperson John Kirby stated that the US administration is aware of the two journalists who were arrested after security forces stormed the Press Syndicate and the fury it has prompted against the Ministry of Interior.

However, Kirby did not indicate that the US government has had any interaction with the Egyptian government over the issue.

Journalists Amr Badr and Mahmoud Al-Saqa were arrested from the syndicate headquarters in an unprecedented incident when security forces stormed the building. The Yanair Gate journalists have been charged with incitement against the regime, membership of a group that aims to harm national unity and social peace, and publishing rumours and false news that could disrupt general security.

On Monday, the prosecutor general claimed the defendants published rumours and false news to incite the 25 April demonstrations, in an attempt to attack police, army forces and police stations.

The European Union spokesperson released a statement on Monday calling the storming of the syndicate “a worrying development, and [is one that] continues a trend of restricting space for civil society and the freedom of expression,  as manifested by the high number of arrests following the April protests.”

“Those detained for expressing their opinion should be released and the law regulating assembly should be brought in line with the Egyptian Constitution,” the statement read.