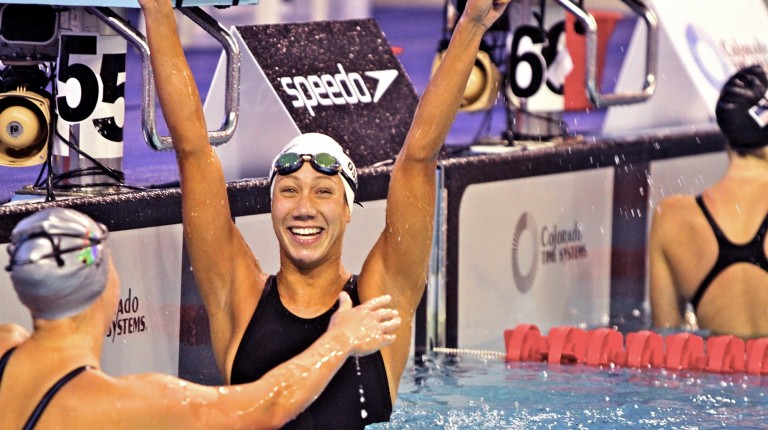 Nicknamed the Golden Fish, Farida Osman has won countless medals and has performed spectacularly in competitions. Among the many Egyptian athletes who have qualified for the upcoming Olympic Games, swimmers or otherwise, Osman, 21, is one of the few who is expected to bring home at least one Olympic medal.

When did you first start swimming?

I started to learn when I was four years old. At first, I learned as a safety measure rather than as a passion, and I was not focused on competing.

Were there any challenges?

Yes, once I started to compete nationally and internationally. My training was fairly unstable due the high turnover of coaches. In Gezira club, where I train, we were used to foreign coaches who would stay in Egypt for a maximum period of 1 year. They would leave for various reasons such as culture shock, poor salaries, intrusive parents, conflict with the club administration, or any issue with renewing their visa. I have been training with my current coach for three years now, which is a first!

Another challenge I faced was communication and organisation between the club, school, the federation, and the coach.

How has swimming influenced your life, both positively and negatively?

It taught me to be organised and to manage my time properly so I could balance my studies and practice and my goals. It taught me to be independent and exposed me to the real world.  Swimming taught me the meaning of hard work and how I can achieve my goal if I put my mind into it.

On the other side of the coin, I am under a lot of pressure and on a tight schedule. I have very little time for leisure. When I compare myself to my friends, they have so much time to themselves to relax and take it easy.

What was your most significant achievement in 2015?

I won five gold medals at the African Games. I also came in 5th at the World Aquatics Championships, held in Kazan, Russia, in the 50 metre butterfly.

At the Pac-12 Swimming and Diving Championships, I set records in both of my events. I completed the 50-yard freestyle in the second fastest time ever recorded, a personal best for me. Myself and my team also set a record in the 200-yard freestyle relay race.

How was the 2012 Olympic Games in London?

I only qualified for the “B cut” so I was put on a waitlist. In early summer 2012, I was told that I did not make it and that the quota was already full. I travelled to the states to look round universities. I arrived in the US 10 days before the London Olympics. Then, the federation called me and told me that the Olympic committee had a spot for me in the 50 metre freestyle! I was so excited and I grabbed the opportunity to compete in the Olympics. Of course, I had not been training like I usually would to prepare for a competition but I could not miss out on the honour of participating in such a great event.

How did you qualify for this summer’s Olympic Games?

How are you preparing for this summer?

I am following a training plan with my coach Teri Mckeever and will stay in the US to train with her. Then, before the games, I will join the national team at the camp in Rio.

Many people have predicted that you will be one of the few Egyptian athletes to bring home a medal. What do you expect for the Olympics?

I don’t want to feel the pressure. I will do my best and try my hardest as I always do. Reaching the finals would be an outstanding achievement and a medal would mean the world to me. We have to be realistic. With hard work, the rest will follow.

Rio is my dream. I am praying and I am confident that God will help me achieve my goal.

What challenges do you face now?

Training is a challenge. I am eager to finish my school year so that I can be more focused and push myself more in practice. I will stay here in the US this summer away from my family to achieve my dream. So please encourage and support me.

Who is your swimming idol?

Natalie Coughlin. She is an American competitive swimmer and twelve-time Olympic medallist.

How has swimming as a sport developed since you started?

It has developed so fast and the competition keeps on getting tougher. But I am happy with what I have achieved. The whole Egyptian swim team has improved a great deal. We never had a large number of swimmers qualifying for the Olympics but now we can compete on the international level with confidence.

Are you satisfied with the support from governmental institutes?

Yes, I am. It is much better than it used to be and this is reflected in the swimming results. People are now more aware of the importance of sports which has changed things for the better.

Are there any issues with women wearing swimsuits to compete in more conservative countries?

No, many countries, such as Tunisia, Algeria, Morocco, Kuwait, and so on are participating in swimming competitions. This idea needs to be changed. The swimsuit is my tool in this sport, like the ball for a football player or the racquet of a tennis player.