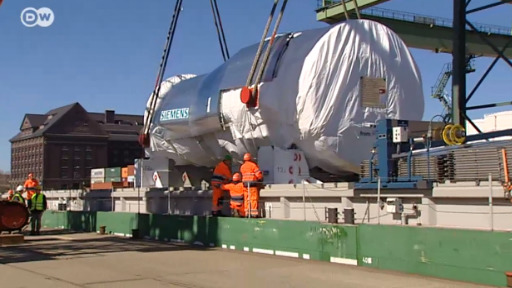 German industrial giant saw its net profit fall between January and March – but only because of large one-time gains in the previous year. Its underlying profit jumped by nearly a third, and its order books are full.
Siemens’ net profit shrank to 1.5 billion euros ($1.7 billion) between January and March from 3.9 billion euros in the same period last year, when it raked in 3 billion euros from shedding its hearing-aid business and a stake in a home appliances company.

Stripping out those one-time items, the German engineering giant’s underlying profit, however, climbed 28 percent to 2.1 billion euros, beating out analyst expectations of 1.1 billion euros. Its order book also grew 7 percent to 22.3 billion euros, thanks to fat contracts including power plants in Egypt and an offshore wind park in the UK.

Large-scale orders like these are considered essential for keeping future figures healthy, as they tend to be sources of revenue for years.

But despite the rosy numbers, Siemens kept its outlook modest, saying it expected “moderate revenue growth”, citing a “further softening” in the global economy. The company is expecting at least 5.3 billion euros in earnings for the whole reporting year, ending in September.

“Despite ongoing challenges in the market environment, we will continue to focus rigorously on profitable growth,” said Siemens CEO Joe Kaeser in a statement.

But weak oil prices have also hit some key Siemens businesses, like its Process Industries and Drives division, where a worldwide on the chopping block. Around 80 percent of the affected jobs are in the southern German state of Bavaria.

Siemens said on Wednesday that the restructuring will set the company back around 200 to 300 million euros, with the costs being booked in the fourth quarter.

Kaeser also took his company’s earnings announcement as an opportunity to campaign for the Transatlantic and Trade Investment Partnership (TTIP) , saying that while his company, and other German conglomerates didn’t really “need” the trade deal given their already strong presence on the US market, Germany’s small and mid-sized companies didn’t have the same advantages

“Especially for them, taking down trade barriers is crucial,” Kaeser said.

Siemens has around 75 plants in the US, with around 50,000 employees. It made revenues of 19 billion euros in the US in the past fiscal year.

Hip hop in the heart of Paris