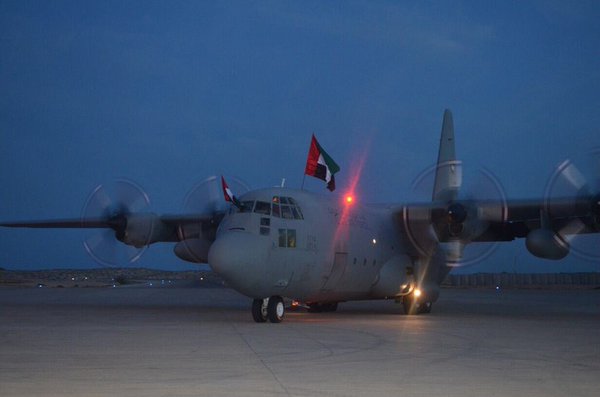 Riyan Airport in Al-Mukalla, Yemen has been reopened after government and Emirati forces recaptured the city from Al-Qaeda in the Arabian Peninsula (AQAP) militants in April.

The first aeroplane to land at the now-operational airport was an Emirati aid carrier bearing medical equipment and supplies.

Flights to and from the airport were halted when AQAP seized control of Al-Mukalla a year ago.

Amid political unrest, the militant group seized Riyan Airport to use as a main port to smuggle fuel.

The United States military announced on Friday that a small contingent of troops has been sent to Yemen to aid the Saudi-led Arab coalition in the fight against AQAP.

This is the first time the US has acknowledged that it has troops on the ground in Yemen to help the Saudi-led Arab coalition, which began its operations in Yemen in order to restore the legitimacy of President Mansour Hadi after the Iranian-backed Houthis seized the capital Sana’a in late 2014.

Mohamed Hineidi‏, a political analyst at the Delma Institute based in the UAE, believes that the UAE’s decision to expel AQAP from Al-Mukalla was welcomed by the US.

Barack Obama tended to be cautious about sending US ground troops into the Middle East in recent years. However, he decided to deploy a small troop to aid the fight against AQAP in Yemen and the Islamic State (IS) in Syria.

“Obama has not changed his mind per se; he has simply jumped at an opportunity presented to him. We need to remember that the US has been targeting AQAP in Yemen since 2002 through drone strikes, air strikes and missile strikes,” Hineidi said.

Peace negotiations between the two rivals in Yemen are taking place now in Kuwait, which includes the Yemeni president and the Houthis.

Hineidi does not believe that the US announcement will have an impact on the talks.

“It is highly unlikely that any US presence on the ground in Yemen, advisers or otherwise, would result in US assistance against the Houthis should the negotiations and ceasefire breakdown completely, unless Washington’s interests are threatened by the Houthis which seems highly unlikely,” he said.

He also added that the Houthis, who are sworn enemies of AQAP and have fought against the group for the past year, have also capitalised on the militant network’s opposition towards anti-Houthi forces.

Saudi Arabia and a Gulf country coalition intervened in Yemen in March 2015 to restore “the legitimacy” of President Hadi.