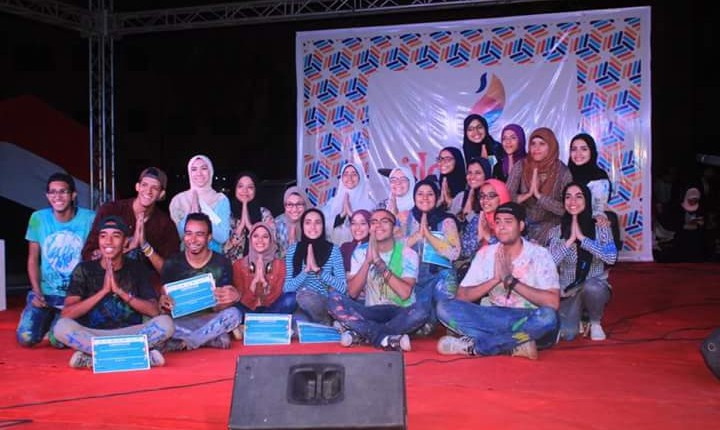 In Al Midan theatre at Cairo Opera House, Alwan Cairo University hosted the closing ceremony of its cultural and artistic workshops. The ceremony was an opportunity for a large number of students from different Egyptian universities to present various live shows in different fields such as narration, percussion, puppet making, graffiti, filmmaking and choirs. The show was open to students, parents, critics and artists to attend and give their feedback about the performance of each group.

“The whole idea was introduced by Alwan, a non-governmental organisation that was established in 2012. It provides different artistic and cultural workshops for young people in downtown,” said Ahmed Abdel Latif, the head of the PR committee in Alwan.  “We found out that 80% of those who attend the workshops are students at different Egyptian universities and that’s why we wanted to move the activity to Cairo, Ain Shams and Al-Azhar universities so that these workshops could be available for all students there.”

Although Alwan Cairo University has an independent identity from the original organisation, they have the same goal: to expose the arts and cultural activities to university students and give them a chance to explore their talents.

“Last year, we were responsible for everything including booking theatres, finding places for training and contacting the trainers. It would have been hard for us to continue independently so we decided to propose the idea to the ministries of Youth and Sports as well as Culture for support and they agreed to help us,” Abdel Latif said.

“We distributed brochures and flyers and used social media to publicise the initiative on a wider scale. Most of the trainers are volunteers who chose to help us because they believe in our objectives,” he said.

Ahmed Fathy, a street artist who is known as “Al Nakkash” on social media, was the lead trainer at the graffiti workshop.  He began drawing graffiti since the beginning of the 25 January Revolution. He believes that it is a valid and different way to express feelings and opinions.

“Although ancient Egyptians are the real inventors of graffiti, as they used to draw on walls to document their history, most of people here still don’t have any appreciation for this kind of art. That’s why I wanted to train more young artists to expose more of our society to this art. The workshop started with 59 students but I was left with just 20 because they were genuinly interested and had the motivation to learn,” he said.

Ahmed Khaled, 20, is a student who believes that the workshop has completely changed his life. “I was obsessed with graffiti in the streets and I wanted to know more about this art. We’ve been attending the training sessions for 10 weeks now and we visited some informal housing areas and poorer districts such as Abu Atata and Abo Qarn where we painted the walls and introduce the residents to the importance of this art,” he said.

Although people used to pester and mock them in the beginning, they began to support the artists when they saw their colourful artistry. “Even my father didn’t approve of the idea until he saw the beauty of the paintings I drew on the walls of my room,” Khaled added.

Another workshop, the puppet show, was one of the prominent and attracted a large number of students. “The puppet industry is being revived in Egypt. This event may also help t spread the idea and grab the attention of more people.  We try to convey the idea that puppet shows aren’t just for children but for all the family,” said Ahmed Abdel Naeim, the trainer at the puppet workshop.

Unlike other trainers, Abdel Naeim did not interview applicants as he wanted any interested students to have exposure to the industry and enjoy every step of it. “We usually make the puppets from recycled materials to reduce the expenses of making giant carnival puppets,” he said.

Aya Mostafa, a student at the Dar El-Olom Faculty in Cairo University, challenged her family to join the workshop. “My main obstacle was finding enough free time to attend the workshop on top of my studies. I worked hard to convince my parents to let me try and I managed to balance my hobby and my studies as, in the future, I intend to have a parallel career in the puppet industry,” she said.

Among the remarkable shows was the percussion performance that used empty boxes, baskets and bottles to produce a rhythmically complex piece of art. “When the Alwan team contacted me to train the students this year, I didn’t hesitate for a second. I wanted students to know more about percussion art and how we can use any materials that are available in our environment to produce art. I am happy that I had eight girls on my team; they are so talented,” said Ahmed Adel, the percussion trainer.

Similarly, Ahmed Ismail Sultan, an engineering student, explained that the percussion training helps students to eliminate negative energy and provide them with peace, self-satisfaction and power to pursue their academic studies and achieve more success.

One of the organisers, Ahmed El-Sayed, said that having such huge ceremony and arranging all these workshops was not as easy a task as it seemed.

“There’s a great difference between being a delegate in the initiative and being an organiser. Last year, when I was just a trainee, I didn’t imagine how much time and effort the organisers put in to make this event work. In addition to improving my talent in drawing portraits, I also managed to improve my communication and managerial skills as an organiser,” El-Sayed said.

In spite of the challenges and occasional stress, El-Sayed considers joining Alwan the best experience in his life. “I intend to continue working with Alwan even after graduation and I hope we will be able to be a positive influence to more students over the coming years,” he concluded.