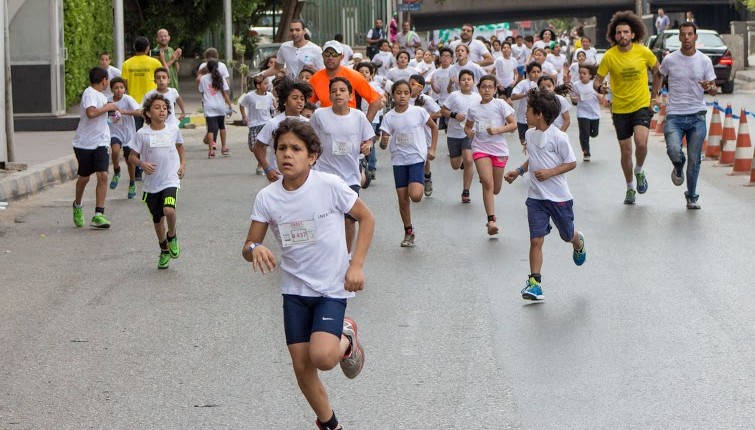 It is not out of the ordinary for Cairo citizens to wake up every Friday morning for a 7km run around the neighbourhood. However, these runs are targeted at adults who are capable of running longer distances, so children have unfortunately been missing out, that is, until now.

Last Friday, Zamalek saw the first long-distance foot racefor children in Cairo.More than 300 children participated in arunaround Al-Sawy Culture Wheel.  While manyspend the early hours of Friday morning sleeping, 7am that day was full of life as the children raced to compete for first place.

The great “Kidathon” is organised by Muricata, a company owned by Egyptian adventurer, mountaineer, and entrepreneur Omar Samra.  The run is the first of its kind for children in Cairo and the third in Egypt.The first two took place in Hurghada and SahlHasheesh.It is considered the largest running event for children aged between six and 14.

“Thereare many similar events in Egypt nowadays. However,these tend to just be for adults.When we decided to organise this ‘kidathon’, we did not anticipate such overwhelming enthusiasm from children and their parents,” Samra said.

“Running is the simplest, cheapest and easiest activity to do.Participants don’t need any equipment other than a pair of running shoes. It’s all about the idea of startingto regularly do an activity on your day-off,” Samra added.

In order to participate in the run, children had to donate one of their toysto the Marwa Fayed Toy Run non-governmental organisation.

“Many children donated more than one toy for registration. They were as interested to help out as they were to race, if not more, and that was very moving,” Samrasaid.

The running events and the day’s entertainment continued at Al-Sawy Culture Wheel, sponsored by real estate company Inertia. There were arts and crafts workshops, as well as a wilderness survival workshop, a family yoga session. The day concluded with a mesmerising performance by Cairokee.

“Parents usually believe that in order to raise a creative, outgoingchildren, they need to invest lots of money in their education. But actually, all what they need to do is to take them out and let them explore nature and themselves,” Samra said.

“Our educational system is a total failure.Even the most expensiveschools allow students to graduate without being very well-rounded. Everything valuableI have learned in my lifewas from wilderness and nature. This is the real investment people should be givingtheir children,” he concluded.

Engage: filling in the gap between government’s failure and the underprivileged’s needs