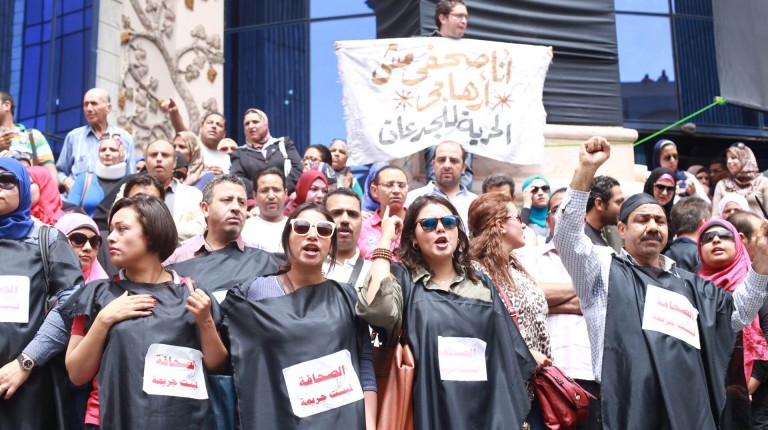 Following the release of a list of demands decided upon during the Press Syndicate’s General Assembly last Wednesday, a division has emerged between two fronts of journalists who are set to face off in a battle for the authority to represent the press community in the conflict with the Ministry of Interior.

Several former and current editors-in-chief from both private and state-run newspapers met at the headquarters of Al-Ahram newspaper on Sunday and called for the dismissal of the current board at the Press Syndicate and objected to the General Assembly’s decisions.

Five board members attended the meeting to “listen to different opinions on the current crisis”, according to a statement released by the journalists. At least two of those members, Mohamed Shabana and Hatem Zakarya, expressed their objection to the General Assembly’s decisions, of which they took part in.

Zakarya submitted his resignation to the syndicate board on Sunday in protest of the “dictatorship of a group that took over the board”, according to his resignation letter, of which Daily News Egypt obtained a copy.

The group of journalists that met at Al-Ahram collected signatures as part of a petition to call for an emergency General Assembly meeting, the aim of which would be to withdraw trust from the current board.

The assembly meeting last Wednesday saw a historic turn out of thousands of journalists. Former syndicate board member Gamal Fahmy said the gathering represented the largest gathering of journalists in Egypt’s history.

However, the legal procedures of holding a General Assembly were not taken due to the large number of attendees.

The demands made during Wednesday meeting’s included reiterating the call for the interior minister’s resignation and demanding the apology of the presidency among other decisions in response to the storming of the syndicate headquarters in early May and the arrest of two journalists.

The syndicate board said on Sunday it welcomes holding assembly meetings. However, dates have yet to be set.