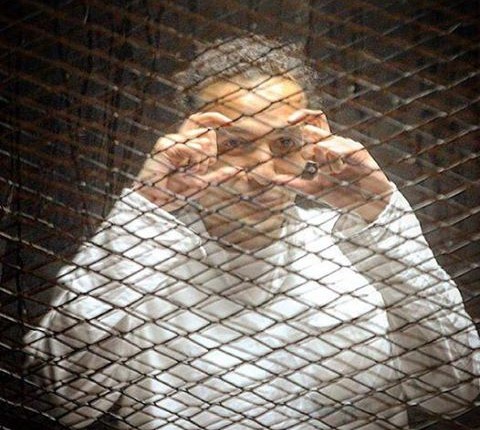 Cairo Criminal court postponed on Tuesday the trial of 739 defendants in the “Rabaa dispersal” case to 17 May to examine additional evidence.

Among the defendants in the case is photojournalist Mahmoud Abou-Zeid, commonly known as Shawkan.

According to lawyer Karim Abdelrady, the court has ordered the prosecution to bring the rest of the evidence in the case in order to be examined. The defendants will continue to be held in the case.

The “Rabaa dispersal” case includes a number of leaders from the Muslim Brotherhood. They are facing charges of attempted murder, vandalism, planning an armed insurrection, and premeditated murder among other charges.

Photojournalist Shawkan has been held in pretrial detention for over 1,000 days, which does not comply with Egypt’s penal code, as it states that defendants should not be held in remand for more than two years.

Police arrested Shawkan in August 2013 during the dispersal of the Rabaa Al-Adaweya square sit-in. Photojournalist Alaa El-Kamhawi previously told Daily News Egypt that there is an odd and obvious stubbornness regarding Shawkan’s detention, seeing as other journalists who were arrested that day were all released except for him.