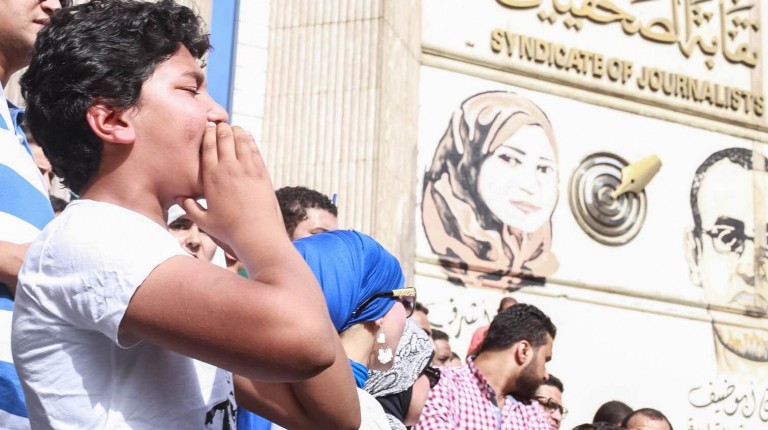 Journalists announced on Tuesday that they would continue their sit-in at the Press Syndicate until the recent crisis with the Interior Ministry is solved, after police forces stormed the syndicate last week and arrested two journalists. The incident took place on International Workers Day and two days ahead of World Press Freedom Day.

Moreover, journalists renewed calls for a protest on Thursday at the syndicate, amid other possible demonstrations and assemblies next week in a series of escalatory reactions. The syndicate’s main demand following the break was the dismissal of Interior Minister Magdy Abdel Ghaffar.

Journalists also invited other professional syndicates to stand in solidarity with the press, such as engineers, lawyers and doctors. The latter two have had their share of demonstrations recently, denouncing police violations against their members and against citizens.

MP Tamer Abdel Kader made threatening statements in Al-Shorouk newspaper on Wednesday, claiming that the syndicate risked being placed under judicial oversight.

Citing the constitution and previous court verdicts, Khaled El-Balshy, deputy head of the syndicate and a prominent protester in defence of press freedom, asserted the illegitimacy of the procedure. El-Balshy was not optimistic about MPs reactions to the meeting.

“But we will have to wait for the parliamentary committee’s final official report on the situation. We reviewed with MPs all statements issued by the syndicate since the beginning of the crisis and explained our point of view during the meeting,” said El-Balshy, speaking to Daily News Egypt while at the sit-in.

On its website, the Press Syndicate published a memorandum of clarification in which it accounted for the events. A copy was sent to the Prosecutor-General.

Article 76 of the Constitution on the establishment of syndicates and federations states: “democratic basis is a right guaranteed by law.” The constitution further ensures the independence and freedom of syndicates to practice their activities and restricts state intervention with their boards of directors, which “may only be dissolved by a court judgment”.

More importantly, Article 77 of the Constitution strictly bans the imposition of any judicial oversight on any syndicate.

The Ministry of Interior employed different tactics in justifying its action based on its duties in law reinforcement, beginning by their denial of the use of excessive force in the process. It further issued a statement following the breach saying they obtained arrest warrants against journalists from the prosecution.

Police also accused the syndicate’s head Yehia Qallash of granting the journalists refuge inside the syndicate.

Meanwhile, a group of pro-state journalists countered the syndicate’s plight. They included five members of its council, thus adding to the political disparities between different parties.

Their role has been to defame those who objected to the ministry’s actions, amid the lack of response by the government and President Abdel Fattah Al-Sisi’s to the unprecedented attack on the press.