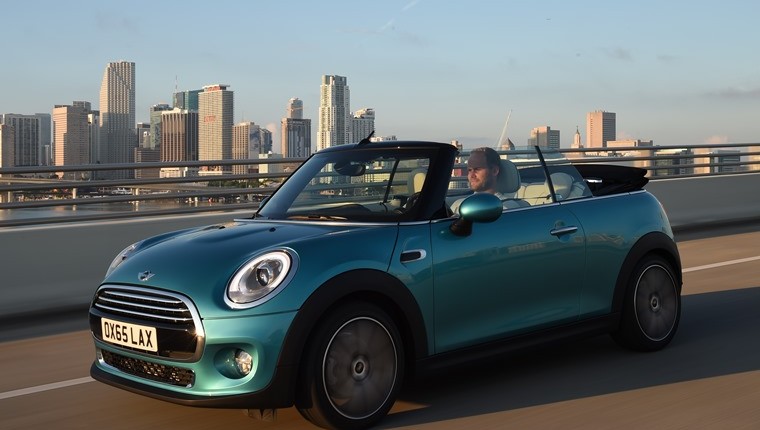 The Bavarian Auto Group, BMW and MINI’s agent, launched new models of MINI. The new MINI Convertible 2017 is a sports car offered at the price of EGP 450,000.

The MINI Convertible’s engine is equipped with a turbo air charger of 1.5 liter in capacity. The engine works with a turbo charging system and direct injection of fuel, along with an adjustable valve control system. The engine is 136hp at 4,400rpm, with maximum torque of 220 newton metres at a low rpm of 1,250.

The vehicle can reach 100 km/h from stationary within 7.3 seconds. It reaches a top speed of 206 km/h. The front wheels torque is transferred through a Steptronic six-speed automatic gearbox.

The vehicle was subjected to several amendments by extending the length by an extra 98mm, adding 1mm to the width, and 1mm to the height, while the wheel base was elongated by 28mm from the previous model.

Similarly, the luggage compartment capacity was expanded by 25% to reach 215 liters, when the roof is closed, and 160 liters when it is opened.

The convertible has a cloth roof which can be automatically closed within 18 seconds, a 90 degrees windshield, LED lights with a daylight lighting system, and a glove compartment that bears a maximum weight of 80kg.

The new model provides a special system of driving modes, which can be controlled by a mode dial on the transmission base.

The system provides the traditional MID mode, sport mode, and green. The accelerator pedal characteristics are adjusted with the sports mode, as well as the guidance process of sports settings.

With the green mode, the driver can enjoy a more comfortable economic driving style; this mode reduces the fuel consumption rates as well.

The German brand MINI succeeded in the first two months of 2016, to increase its year-over-year sales by 8% despite the foreign currency problem, which overthrew the sales in the car market and led the overall sales to decline by 33%.

The High Line 5-door model ranked first by selling nine cars within two months worth EGP 3.1m, to achieve an increase in sales by 50% comparing with the corresponding period of last year, during which only six cars were sold.

Mini Cooper Basic six sold cars worth EGP 1.6m to rank second with an increase of 50% compared to four cars sold in January and February 2015, followed by Countryman Comfort occupying the third place by selling five cars to increase sales by 25%. The Countryman Elite sold four Cars comparing with selling only one car in the same period last year. MINI COOPER LUXURY ranks the fifth by selling two cars only during the two months, while Mini Cooper S JCW sold only one car.

The group decided to launch two new models, Club Man, and John Cooper for the first time in the local market. Club Man’s price is set at EGP 438,000, while that of John Cooper is EGP 545,000. The Company will deliver the cars after a month and a half from the reservation date to overcome the problem that faces all the brands in the local market in terms of reservations’ delay.