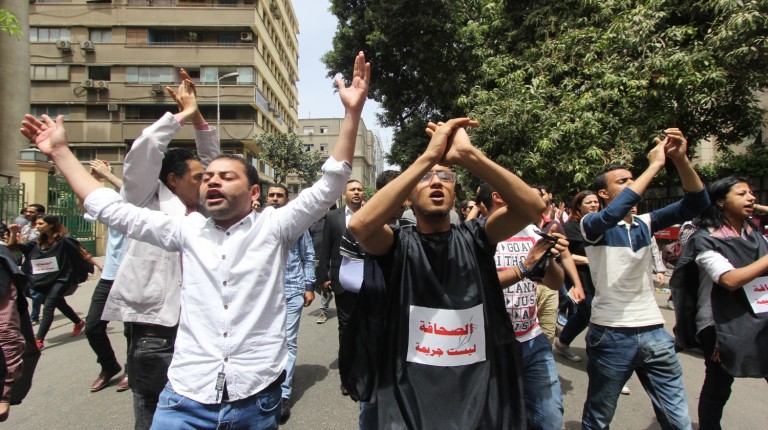 The parliamentary media committee has completed its assessment report on the recent crisis between the Press Syndicate and the Ministry of Interior, after police stormed into the syndicate earlier this month, claiming a warrant to arrest “wanted” journalists.

Head of the media committee MP Osama Heikal, a member of the pro-regime parliamentary coalition For the Love of Egypt, demanded that all complaints filed by the syndicate to the prosecutor-general regarding reported police violations be investigated and their results made public, according to statements published Monday by state-run news agency MENA.

Last week a parliamentary delegation sat with members of the syndicate’s board who presented them with a full account of the development of events since the incident on 1 May.

Although members of the syndicate said they were not putting much hope on the parliament, Heikal’s reported statements assured the committee’s role would be to reduce the gap and calm tensions.

The syndicate’s minimum demand was an apology from the ministry, which later escalated to demanding a presidential apology and the dismissal of Minister of Interior Magdy Abdel Ghaffar. However, the ministry rejected such claims and maintained that it had not violated the law and was only reinforcing the arrest warrants of the individuals for whom the syndicate had provided refuge.

At the same time a story ran on Monday by state-owned Al-Ahram suggested the parliamentary committee’s report will back up the ministry’s story, leaving the final decision on the legitimacy of procedures followed by the police to the judiciary.

Strangely, the committee is calling for the non-politicisation of the issue. Meanwhile, committee member MP Mostafa Bakry has led a severe media campaign against some of the syndicate’s board members, such as head of its Freedoms Committee Khaled El-Balshy, whom he accused of spreading exaggerated and incorrect information about violations of press freedom in Egypt.