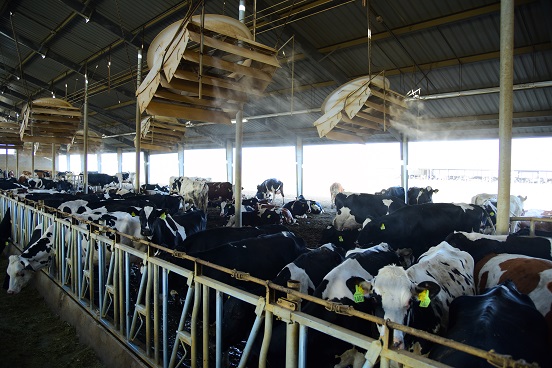 Juhayna Food Industries Company, the largest producer of bottled milk and juice in Egypt, aims to produce 30% of its own needs in its farms by the end of 2018.

Juhayna needs about 800 tonnes of milk daily in order to provide the various dairy products needed by the Egyptian market, where it produces only 50 tonnes and depends on about 110 other farms to obtain its needs, according to Mohamed Obaid, head of the animal production sector in El-Enmaa for the Agriculture Development Company.

Daily News Egypt sat down with Obaid during a tour of the company’s farm in the Bahariya oasis in the area of Mandesha, which is located 360 km away from Cairo on an area of 11,500 acres, where 500 acres are allocated for dairy production projects.

How will Juhayna be able to produce 30% of its daily needs of dairy?

We began the transition plan in 2009, through buying 11,500 acres in the Baharyia Oasis in order to build a farm we hope would become the largest in Egypt in terms of production and the number of cows by the end of 2018.

Juhayna was established in 1983. It produces dairy products and juices then exports its production to markets in the Middle East, the Americas, and several European countries.

Juhayna owns 26 sales and distribution branches, and has its own distribution fleet that includes more than 1,000 vehicles.

Juhayna will have injected investments worth EGP 600m in the Mandesha farm in Baharyia oasis by the end of 2018, in order to reach EGP 2bn by 2020. So far, about EGP 600m were injected in the project.

How will you utilise the new investments to increase dairy production?

The new investments will be used to establish a cows’ milking place with the amount of EGP 40m. We will also buy 400 new cows, where the cost per each cow is EGP 30,000, which will increase the total number of milking cows to 1,400 by the end of June. Moreover, a laboratory for quality control will be opened, in addition to four farmyards for younger newly-weaned cows.

How will your situation and your position in the milk production market in Egypt be by the end of 2018?

I expect the number of cows to reach 7,500 at the end of the first phase in the end of 2018. The production then should amount to 250 tonnes per day, making us the biggest milk producer in Egypt, where the current biggest farm produces 220 tonnes per day with 6,000 cows only.

By the end of 2018, Juhayna would have doubled the production of its Wahat farm five times.

The company completed the planting of 6,500 acres with alfalfa, corn, potatoes, and citrus fruits such as oranges and lemons. Even though Juhayna is not an agricultural company, we aim to fulfil part of our factories needs.

The group carried out the animal production project over four phases, each accommodating 7,500 cows to reach 30,000 cows by the end of the fourth phase in 2020. The total investment cost is estimated at around EGP 2bn.

By the end of the project, the total production of dairy should reach 400 tonnes of milk per day. In parallel, we will be reclaiming 10,000 acres, of which 500 acres will be used for livestock production.

Juhayna will join the five biggest milk producers in the Middle East in 2020, next to the Saudi Almarai and Al Safi.

Juhayna believes the food market in Egypt has been growing significantly, thanks to the large increase in population and per capita dairy and juice consumption, as well as the increasing awareness of using only packaged milk. Egypt has the biggest population among Arab countries, with over 90m people.

Juhayna benefits from population growth in Egypt and from any improvement to the standard of living. But it is affected by the price hikes of raw material and shortage in dollars needed to import some production inputs.

When will the group stop importing cows and rely on your own strains?

We will not be buying any cows from abroad until the end of 2018 and will rely solely on types of cows we already bought. Each cow produces an average of 32-33 litres per day.

Juhayna acquires 70% of the milk market in Egypt and 25-30% of yoghurt and juices markets.

Juhayna competes with companies such as the Saudi Al Marai, the Swiss Nestle, and the French Danone.

Does the company produce its own feed or import it?

The company secures about 65% of its feed needs. The remainder amount is imported from abroad, including dietary supplements, vitamins, and yellow corn.

The company completed the drilling of 44 wells for the agricultural activity, in addition to two others for animal farms. We also contracted to install a solar power plant for a capacity of 2 MW, with investments of $2m.

The company is working to build a residential city for workers next to the farm with investments of EGP 15m. This city should be finished at the end of this year. We will adopt an integrated system for water recycling and reuse at a cost of EGP 30m.

Will the company boost its production in Ramadan, as dairy consumption increases?

We will work to enhance production of all our products by about 30% during Ramadan. Consumption of food in general increases during Ramadan, especially as this year it coincides with the summer. The first 15 days of the months will see consumption much larger than any other time.

Last Ramadan, Safwan Thabet said his company boosted its production by 10% to provide 12m consumers with 8m packs per day of different products.

Were your exports affected by the Arab Spring?

Juhayna lost about 25% of its exports bill because of political and security instability in different Arab countries. The size of Juhayna’s exports to Libya, Syria, and Iraq declined to 5% from 30% of the company’s total exports.

We are currently on the lookout for alternative markets. We also aim to expand in the domestic market that has been seeing an increasing dairy production of 15% per annum.

Do you rely on milk powder in the manufacture of dairy products?

Yes, but in very small quantities for two months per year. We do so to offset the volume decline in milk production. This takes part under strict supervision and evaluation of the farms producing milk so that we can maintain the quality of our products.

Do you import sperm to impregnate cows for breeding?

Yes, we import sperm every year to breed the same type of cow. This process is done according to the highest international standards, which makes sure to choose the right male and ensure the quality of sperm to produce cows than provide the highest quality milk.

Will you consider agricultural investment through your land portfolio in Farafra and the oases?

Not at the time. but this could be an option later. We currently plant onions and potatoes that are sold to exporters. A full transition to agricultural production is very expensive and time consuming.

It is likely to build a feed factory to meet the needs of the farm and ease dependence on the foreign market to obtain 35% of the feed.