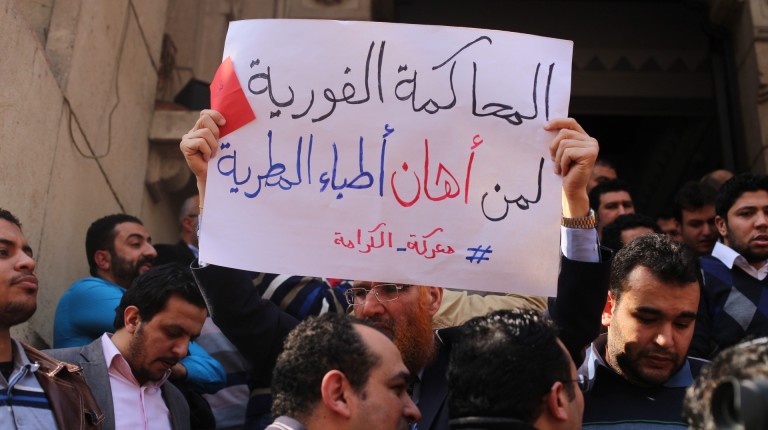 The Doctors Syndicate said the charges directed at the police officers include unlawfully detaining the doctors, verbally and physically assaulting the doctors, and abusing power.

Moamen Abdel Azim and Ahmed Mahmoud El-Sayed, who are doctors at Al-Matariya hospital, alleged on 28 January that they were subjected to assault and verbal abuse by a group of police officers who repeatedly attacked them on hospital premises.

In the series of events that followed, the Doctors Syndicate harshly condemned the incident. The doctors were allegedly subjected to further threats which forced them to drop the charges against the police officers.

In response, the syndicate decided to hold a general assembly to vote on holding a strike, calling on all of its members across Egypt to come to the syndicates’ headquarters on a Friday. Their stand against attacks on medical staff garnered solidarity from other syndicates, public figures, and doctors. Four-hundred-and-fifty people signed an online petition in support of the syndicate’s stance.

Ahead of the general assembly, the general prosecution decided to reopen the investigation in the case, as criticism and tension escalated.