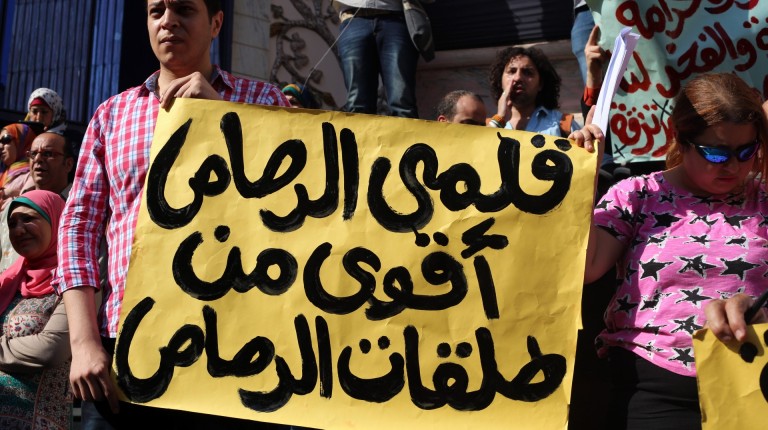 Despite security restraints consisting of vehicles and forces cordoning off the Press Syndicate, hundreds of journalists attended a Wednesday conference, which took place in a lively atmosphere of chants for the rejection of the practices of the Ministry of Interior against press freedom.

“We began the journey to restore the dignity of the syndicate and we will not stop until those responsible for our assault are held accountable and ensure this should never happen again, not because we differentiate ourselves from the rest of the people but for the sake of reinforcing the law over the display of power and terror,” head of the Press Syndicate Yehia Qalash said during the conference.

The message was intended to prevail over state-sponsored journalists and members of the syndicate’s board who took a stance against large-scale demonstrations against police forces’ storming of the syndicate.

“We filed complaints to the prosecutor-general and detailed accounts prepared by the legal team. We have spared no efforts in reaching out to state institutions and initiatives to solve the crisis, to which we asserted that we were not in dispute with the state but will not retract our demands to protect our pride,” Qalash added.

When journalists rebelled in the weeks following 1 May, they demanded the dismissal of Minister of Interior Magdy Abdel Ghaffar, later they added the demand of a presidential apology.

“It’s been two weeks without any progress. On the contrary, counter-interventions are obstructing the path to finding a solution. Once more, accountability is the fair solution,” he continued.

This comes amid a pending crisis between the syndicate and the Ministry of Interior, following the police storming of the syndicate on 1 May, on grounds of arrest warrants issued against journalists Amr Badr and Mahmoud El-Saqa who were at the syndicate.

The syndicate denounced the move describing it as an assault on the syndicate, amid ongoing security violations against journalists documented in its reports. Moreover, the syndicate said the ministry failed to respect legal procedures when arresting journalists, which would require the presence of a syndicate representative and more cooperation with the syndicate head.

However, the ministry refused to acquiesce to these accusations, denying the use of excessive force, citing the prosecution’s arrest warrants against the journalists and the respect of legal procedures in reinforcing the law.

MP Osama Sharshar took a stance in favour of journalists unlike the stance of the parliament which is adverse to the media in general. “Nobody can impose a judicial administration on the press syndicate,” Sharshar stated in response to threatening press statements made by some MPs last week.

The syndicate continues to demonstrate and hold meetings to discuss the ongoing crisis.

In Pictures: Journalists turn out in large numbers for syndicate conference