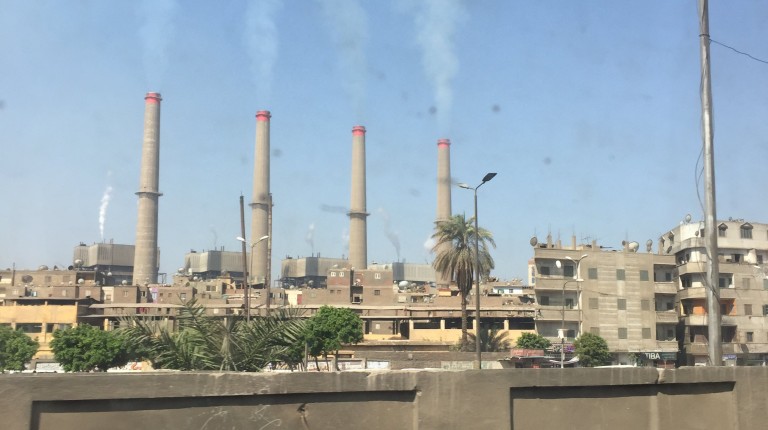 Half a million citizens are currently fleeing their homes in Sri Lanka after the heaviest rains in 25 years fell over the capital of Colombo earlier this week. More than 60 people have already died, while there still remains a possibility that the death toll will continue to climb.

This incident cannot be separated from the context of global existential threats triggered by climate change. Rather it is a continuation of climate change effects that the world started wrestling with during 2015.

“The global average surface temperature in 2015 broke all previous records by a strikingly wide margin,” the United Nations World Meteorological Organisation (WMO) stated in March. “For the first time on record, temperatures were about 1 degree Celsius above the pre-industrial era.”

This rise has taken its toll on many other parts of the world, including Egypt, according to WMO.

The Sri Lanka floods reflect that the pace of climate change effects is much faster than the diplomatic negotiations pace, which puts forth the need for expedited measures to contain the phenomenon.

Representatives of nearly 200 countries reached a historic binding agreement in December 2015 that set ambitious goals to keep a global temperature rise this century below 2 degrees Celsius. The agreement was opened for signatures in late April during a ceremony in New York attended by over 130 countries.

Several articles of the agreement, including articles 4, 7, 9, 10, 11, and 13, stated that each country should submit Intended Nationally Determined Contributions (INDC) to outline strategies towards the 2 degrees goal based on local conditions.

The agreement also highlighted the concept of shared responsibility among parties. It stated that members of the developed world should empower developing countries with needed funds and technologies to implement their intended strategies.

Highlighting a stance that sees climate change as an inevitable phenomenon and Egypt’s susceptibility to its adverse effects as asymmetrical to the developed north, Egypt advocates a strategy of adaptation rather than continued mitigation.

At a press conference a few days following his return from the Paris summit, Minister of Environment Khaled Fahmy said: “Other countries were pushing us to adopt elimination strategies, but what we truly need is adaptation.”

Despite the importance of sharing responsibility, the Egyptian Centre for Economic and Social Rights (ECESR) said: “Egypt should rethink mitigation strategies as well, use political will to enforce worldwide mitigation.”

Amena Sharaf, an environmental researcher at ECESR, told Daily News Egypt: “the Egypt INDC was broad and not detailed. It also did not slightly mention plans of expanding the use of fossil coal in the new energy mix.”

More than 162 countries submitted their INDCs so far. Despite the variation between countries economies, a wide range submitted similarly detailed objectives with clear timeframes; even countries that are witnessing security challenges like Yemen, according to published INDCs on the UNFCCC website.

In the energy sector, Yemen pledged to promote off-grid electrification of individual rural Households for “110,000 rural HH, 45% of identified market potential, to be electrified Solar Home Systems until 2025, with installed capacity around 5.5 MWp”.

This thorough preview of intended contributions and needs, backed up by data and figures, has been adopted by many other countries as well, including China, Afghanistan, United States, and Tunisia, according to their published INDCs.

Egypt pledges: “Improving energy efficiency, utilising solar energy for water heating, and using renewable energy for power generation,” in its INDC among mitigation measures; not mentioning by timeframe or exact percentages. The INDC also stated Egypt’s need for $73bn as a total estimate to undertake mitigation measures, without specifying their allocations.

Despite contributing just 0.6% to the world’s CO2 emissions, Egypt is a vulnerable country to climate change. In August 2015, at least 97 people died from heat exhaustion, while in November dozens died and others were displaced after floods caused by heavy rainfall hit Alexandria and Beheira.

Located a few kilometres away from the city of Alexandria, AbdelKader village suffered gravely during the rain floods.

In a visit by Daily News Egypt to the remote village, it became apparent that the losses were far worse than previously thought. Citizens attributed the main reason behind this to the village’s ailing infrastructure and delayed official response to resolve it.

Nearly a month after the rainfall, the water was still seen covering the streets of AbdelKader. Citizens step on scattered wooden pieces to avoid the thick mud. However, this is a much better situation than the days of heavy rainfall. “Back then, we used a boat to move around,” said Rafaat, one of the citizens.

This was not the first time AbdelKader village has been affected by heavy rainfall. However, citizens agreed that this time was much worse. The water reached unprecedented levels, damaging home appliances, overloading water drainage canals, and leaving dozens of families in peril.

“All my furniture was ruined, the kitchen, the bedroom, and all appliances,” Rafaat told Daily News Egypt. “I also saved one of my children twice from drowning in the water.”

The residents said there were no significant casualties, and nearly all homes in the village were without electricity for at least 10 days after the rain stopped. The level of damage varied from one home to another.

The majority of the families were not ready for the consequences of such heavy rainfall. One family with a bride-to-be lost some brand new furniture and appliances. They tried to raise the ground inside their home by a few centimetres using cement in order to avoid further flooding.

Atef Amin, director of the Egyptian Coalition for Slums Development, told Daily News Egypt that 60% of the buildings in Egypt were not planned properly during construction. Among that percentage, he said there are at least 850,000 inhabitants in unsafe areas, which are located on unstable ground.

According to Amin, those areas lack all kinds of public services, including access to clean water, drainage canals, and electricity.

“The existence of those areas is a fundamental barrier for development ambitions. And municipality corruption makes it worse,” Amin said. “Meanwhile, those citizens have no other choice as they cannot afford to live in normal apartments.”

The plight of unplanned urban areas has piled up over many decades due to increasing demand from citizens across Egypt to find better opportunities in the capital, and an inadequate official response to address their hardships.

However, it seems that the current regime is trying to pick up the pieces. During the inauguration of new social housing programme on the outskirts of Cairo, President Abdel Fattah Al-Sisi said on Thursday: “unsafe suburbs are below the standard of living that the Egyptian people deserve.”

Al-Sisi ordered for the Ministry of Housing and the Armed Forces to ramp up development efforts to better the suburbs that are deemed unsafe within a two-year period. Unfortunately, climate change does not wait for anyone.

A few days after the ratification of the historic Paris Climate Conference [COP21] agreement, Egypt started developing its responsibilities and capabilities to contain climate change.

The National Council for Climate Change announced it would hold its first meeting in early May, with representatives from 10 ministries, to outline collaborative action steps, which include mitigating CO2 emissions and adapting to the effects of climate change.

Besides infrastructure deficiencies, climate change is expected to affect wider sectors in Egypt. A World Bank report stated in 2014 that if temperatures increased to 1.5 degrees, heat waves in Cairo will extend for a complete month, while 1.9 million Egyptians will be threatened by a rise in sea levels.  Meanwhile, Egypt’s Third National Communication (TNC) report highlighted potential damages to the tourism industry, which has already witnessed a steep decline since 2011, especially in resort areas located along the Red Sea.

“If we do not have an adaptation and mitigation programme immediately this year … we will never be able to control climate change,” he told Daily News Egypt.

According to Allam, those strategies begin with modifying the INDC, allocating $3bn annually for adaptation projects, transferring to smart agriculture, and creating a zero pollution industry.

Considering the Nile Delta as one of the red spots for climate change impact, Allam asserted development strategies should transfer to the western desert. He referred to the 1.5m hectares national project as an adaptation asset.

In terms of mitigation, Allam said Egypt needs to immediately transfer to clean energy, by giving up fossil fuels, and cultivating at least 22m trees all over industrial zones to act as an absorption tool to carbon emissions.

Meanwhile, an increasing level of awareness in Egypt towards climate issues is considered an asset for enhancing adaptation and mitigation strategies.

350.org international movement, began in Egypt in 2009 with a group of individuals concerned about climate change, with an aim to bring the attention to the issue and become part of relevant international events.

In early May, the movement took part in a global campaign entitled Break Free against use of fossil fuels by previewing a documentary screening on coal use in Egypt.

In February, 350 conducted a seminar about the impact of climate change on Egypt’s agriculture sector. In November 2015, they organised a run in Alexandria with volunteers holding signs that illustrate Egypt’s climate conditions.

“The audience interacted with those activities. The activities also reflected that climate change is still an overlooked issue in Egypt,” Rifaat said. The movement strives to find more innovative approaches to reach wider segments, according to Rifaat.

“People are familiar with the effects of climate change. Their lives were affected with it; yet they do not understand that those crises were triggered by climate change resulting from increased CO2 emissions and burning fossil fuels,” she said. “It is all about connecting the dots.”

NATO wishes no conflict with Russia, but will protect members

Germany drops out of top-10 most competitive economies