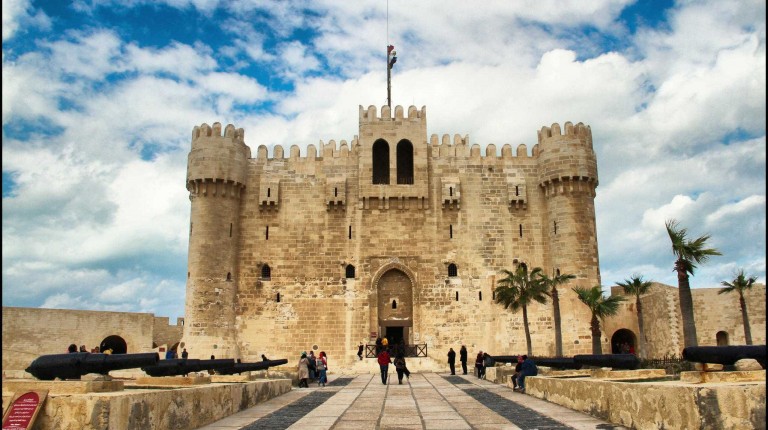 When Sultan Al-Ashraf Sayf Al-Din Qaitbay built his ucitadel on the Mediterranean Sea coast during the 15th century with the aim of it becoming one of Egypt’s defensive strongholds, it is likely that he never imagined that one day his fortress would be turned into a wedding hall.

Despite the historical and cultural value of the citadel, the Ministry of Antiques has opened it be used for wedding ceremonies as a means of making a profit and refreshing domestic tourism.  As a result, Alexandria’s cultural advocates launched a campaign called “the Citadel isn’t a wedding hall”, which went viral on social media within a few hours.

Although a large number of people started to share the hashtag on their profiles asking the Ministry of Antiques to stop what they called “a cultural crisis that needs urgent interference”, the citadel hosted another wedding last Friday.

“Our campaign aims to raise people’s awareness about the priceless historical value of the citadel and provide alternative solutions to the problem,” said Ahmed Essmat, the founder of the campaign.

“We understand that Egyptian institutions are trying to make maximum use of the available resources by engaging in different activities, but underestimating the citadel this way is totally unacceptable. Outside the walls of the citadel, there’s a big space and a number of clubs that are more suitable for holding parties and wedding ceremonies,” he added.

In his opinion, the citadel is public property and officials do not have the right to exploit it without holding a community dialogue with representatives of different parties and civil society organisations as well as specialised archaeologists. However, renting the citadel for EGP 15,000 will make it affordable for those who cannot afford the wedding halls in hotels and clubs.

“Instead of holding wedding parties, we agree to host big local and international cultural and artistic festivals and ceremonies in the citadel as a way to help refresh tourism. This happens in a number of Arab countries which host big festivals in archaeological places, such as Jarash or Carthage, to introduce their history to the whole world,” he said.

The area is also open for international filmmakers to use, for those looking for a backdrop to their movies and documentaries being filmed in Egypt.

“Morocco, for example, opens its deserts and historical locations for shooting. Unfortunately, international filmmakers resort to Morocco to shoot movies about the pharaohs and the ancient Egyptian history because it’s difficult to film in Egypt,” he said.

Essmat asserts that their campaign does not intend to achieve any personal interest or blame any officials and they will not accept being manipulated by any political party who wants to make use of the campaign. They also refuse to denounce newly married couples or any guests by using their photos or names or sharing them on social media.

“For many years, Qaitbay citadel has been suffering from many problems related to the accumulation of the rain and sewage water inside it and the effects of rising sea levels on its walls. Instead of holding weddings, it’s better to pay more attention to the threats on this important place and how to overcome them,” he concluded.

Alexandria on a shoestring