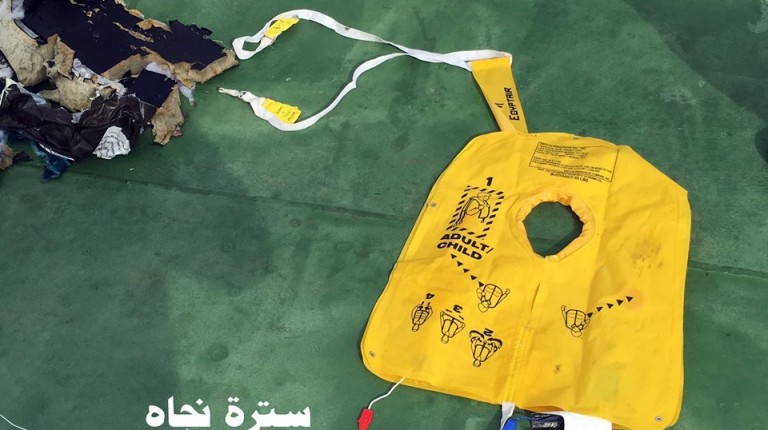 Many speculations have been made on what caused EgyptAir’s flight MS804 to crash early Thursday morning, shortly before it was due to land, over the Mediterranean Sea near the coast of Alexandria where the Egyptian Armed Forces located debris from the aircraft.

Between the widespread theories of a terrorist act or a technical failure, all scenarios are possible at this point, and none of the suggestions can be taken as fact, as long as the aircraft’s black box is still missing. Ongoing investigations include Egypt and France, along with assistance from Greece, in the search process.

The first information provided by the Egyptian military was that it received no distress signals from the aeroplane. EgyptAir made a contradictory claim shortly after announcing the disappearance of the plane from radar, which was then retracted.

The aeroplane reportedly disappeared from radar screens at around 2.30am local time with the last point of contact taking place 174 miles from the Egyptian coastline, according to EgyptAir.

Greek Air Traffic controllers also said that after the aircraft’s captain successfully verified his entry to and exit from the Greek zone, their repeated attempts to contact the aeroplane received no response.

Information made available by Greek authorities regarding the sudden drop of the plane from nearly 37,000 feet to 15,000 feet, while making sudden swerves, pushes forward the likelihood of a sudden incident that was out of the pilots’ control.

On Saturday, French authorities claimed smoke had been detected onboard minutes before the aeroplane’s crash, revealing automatic signals sent by the aircraft to the Aircraft Communications Addressing and Reporting System (ACARS).

Data shows seven signals that suggested smoke was present in a lavatory that spread to the cockpit’s avionics. The signals indicate sensors were altered near windows on the right-side of the cockpit, which seemed to have continued for nearly three minutes.

“Although a fire is a plausible explanation that would explain a sudden incident taking place, it would be hard to determine its cause, which still leaves space for all possible explanations,” a pilot who flies the same Airbus 320 type told Daily News Egypt on Sunday, on condition of anonymity.

I suspect the EgyptAir pilot found himself in an unexpected situation, he explained, adding that the risk of fire hazards are the “most dangerous” threats to plane’s safety. “I would rather fly without fuel or with failed engines but nothing scares me more than onboard fires,” the pilot stated.

There are different types of fires and smoke situations which can vary in their degree of control. “Even equipment brought onboard that ignites is controllable and we are trained to do so. Once you have located the source of the fire, you can put it out,” the pilot said.

A fire situation can become more complicated if the fire occurs in the aircraft’s air conditioning system, which would require longer extinguishing procedures. “We might need to descend quickly to adjust the cabin’s air pressure, after turning off the ACs,” he said.

However, the pilot pointed out the riskier situation is a fire hitting the avionics. “Statistically speaking, if you fail to put out the fire within 10 minutes, you’re dead,” he said. He explained that avionic fires could be triggered by short circuits—which would require minimising the use of electricity.

On the one hand, the pilot explained that even if a fire does not ignite as a result of short-circuiting, it could spread smoke into the cockpit and affect the pilots—who need to urgently put on their oxygen masks before acting. On the other hand, if the avionics system is hit, one system failure will continuously lead to another.

“Most importantly, cockpit fires are harder to detect or be felt, and that means that by the time smoke is detected, the problem could already be out of control,” the pilot said.

“Bear in mind that, like any human being in tough circumstances, the pilot is working under extreme stress and possibly choked by smoke and what happens next partly depends on a good or bad decision,” he said.

Explaining that radio equipment is likely to be damaged by a fire, the pilot insisted that establishing communication with air traffic controls is the “last thing on your mind when you are trying to save a plane. Your thinking is oriented towards the fastest landing and it’s once you have taken control over the situation that you begin informing traffic control authorities”.

According to him, all means of alerts inside the cockpit immediately notify pilots of any disabilities on board, with different types of signals according to the degree of seriousness. “Red lights would go on and sirens would be heard in the case of danger, while green lights would show minor issues such as unadjusted room temperature,” Mohsen said.

This is in addition to the co-pilot, who is in charge of monitoring the flight and the pilot’s performance, he added.

“But the sudden drop in altitude is suspicious,” Mohsen said. “The aeroplane’s descent is a manual procedure and is gradual, with the exception of a sudden change in the cabin’s air pressure which requires fast adjustment between the internal and external air.”

However, Mohsen prefers to rule out the possibility of technical failures owing to the “meticulous checks performed on aircrafts”. Among these, he cited pilots’ careful systematic evaluation for competence, in addition to the flight’s monitoring systems, as well as pre-flight checkups.

Aircraft manufacturer Airbus said in a statement that its A320 was the most secure aircraft model with 12,499 orders and 7,020 deliveries to date.

Yet, Mohsen asserts there can be no speculations until the aircraft’s cockpit voice recorder–also known as the black box–is recovered.

The flight was carrying 66 people, including 56 passengers and 10 crew members.

In Pictures: EgyptAir MS804 Candles lit at the press syndicate to mourn victims of the crash