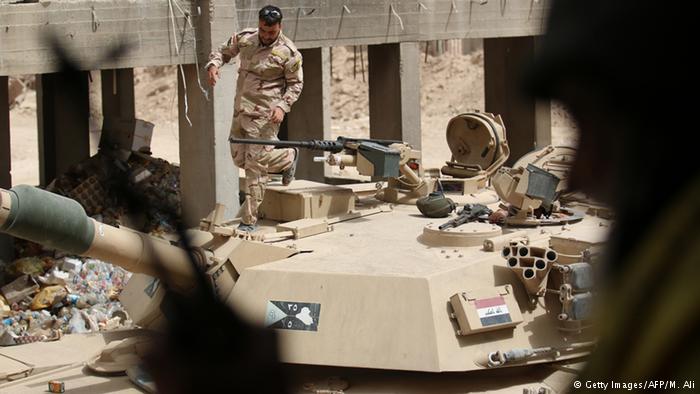 Civilians in the Iraqi city of Fallujah, have been told to flee their homes ahead of a planned assault on the “Islamic State” (IS) stronghold. Fallujah and Mosul are the last major Iraqi cities to be held by jihadis.
Prime minister spokesman Saad al Hadithi said in a statement on Sunday that Iraqi forces were “going to the city of Fallujah to clear it from the Daesh (IS) gang.”

“Your sons the heroic fighters in the armed forces are ready to achieve a new victory,” al Hadithi said in a statement. He did not say, however, exactly when the assault on the jihadist stronghold would begin.

The army “is asking citizens that are still in Fallujah to be prepared to leave the city through secured routes that will be announced later,” Iraq’s military said in a statement on Sunday.

Families in Fallujah who couldn’t flee the city should raise white flags to mark their location, the military added.

Fallujah, which lies just 50 kilometers (30 miles) west of Baghdad has been out of government control since January and is one of the last two Iraqi cities held by IS.

Iraqi forces have regained significant ground in the Anbar province in recent months, including its capital Ramadi further up the Euphrates River valley. The Baghad-based pro-Kurdish news website “Shafaq” also reported on sunday that around 20,000 troops had arrived on the outskirts of Fallujah ahead of the impending assault.

Security stepped up around Green Zone

In Iraq’s GreenZone on Sunday, security forces also installed additional blast walls and layers of razor wire. The compound, which is home to most of Iraq’s ministries and foreign embassies, has been breached by hundreds of supporters of powerful Shiite cleric Muqtada al Sadr in recent months. The protesters have held numerous demonstrations and sit-ins, calling for government reforms.

The new measures came just days after two protesters were killed when hundreds of demonstrators stormed the prime minister’s office and the Parliament building.

Al Sadr has since issued a statement condemning the use of force against “peaceful” demonstrations and vowed to continue to support the “revolution” against the government.

Iraqi army tightens its control over Fallujah except for ‘some pockets’: Iraqi PM