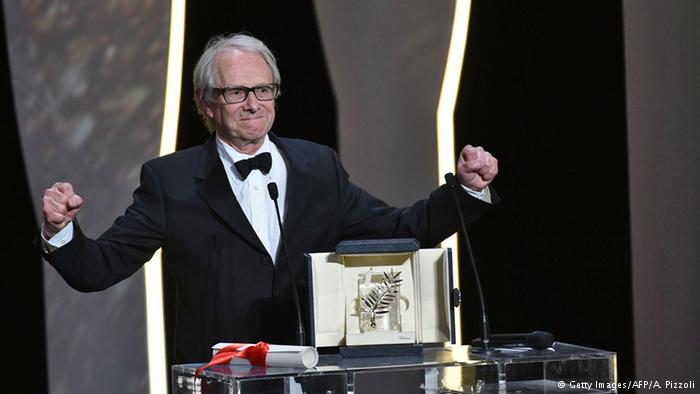 Veteran British director Ken Loach has won his second Palme d’Or prize for best film. Surprise winner “I, Daniel Blake” highlights the struggles of bureaucracy in the UK’s shrinking welfare system.
The 79-year-old’s win on Sunday marked a major upset at the prestigious film festival, with Maren Ade’s German comedy “Toni Erdmann” and Jim Jarmusch’s “Paterson” – which were favorites for the award – both leaving the ceremony empty-handed.

“I, Daniel Blake,” was Ken Loach’s thirteeth entry in the festival’s main competition. He previously won the Palme d’Or in 2006 for “The Wind That Shakes the Barley.”

This year’s prize-winning film tells the story of Daniel Blake, a widower and carpenter, struggling to claim benefits in Britain’s shrinking welfare state after suffering a heart attack and being told by doctors he can no longer work.

Blake finds himself in a Catch-22, however, when an invisible “decision-maker” rules he is too healthy for benefits. He goes on to befriend a young single mother of two, who is sanctioned for being late to the benefits centre, leaving her with no money for food.

“The world we live in is at a dangerous point right now,” Loach said as he accepted his award. “We are in the grip of a dangerous project of austerity, driven by ideas that we call neo-liberalism that have brought us to near catastrophe.”

Going home with the runner-up prize was young Canadian director, Xavier Dolan. Prior to the awards ceremony on Sunday, the 27-year-old’s hot-tempered family drama “It’s Only the End of the World” had been widely panned by critics.