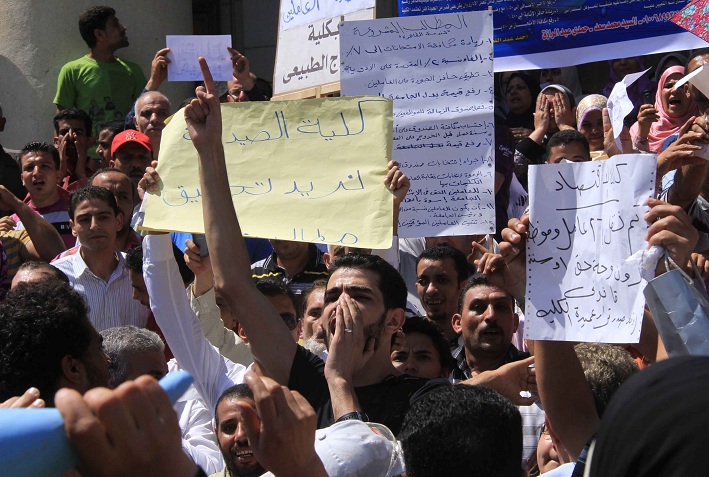 Dozens of transferred teachers organised an ongoing protest that began on Sunday, calling on the Ministry of Education to relocate them to work in their governorates due to the long distances they have to commute.

Abd Al-Azeem Al-Sheikh, one of the protesters, told Daily News Egypt that there are around 2,000 teachers, all of them men, who are currently not working in their governorates, despite the shortage in the number of teachers there.

“Some of us have to travel for more than 15 hours, and the majority of our salaries are spent on transportation,” Al-Sheikh said.

He continued that the salaries they receive are not enough to cover the expenses of two households in different governorates. Also, most women work in their own governments and the minister always insists that men have to bear the hard conditions and promised them that they will soon be relocated in their governorates, but nothing happened.

“We have to pay for transportation, water, electricity, and all of these are basic needs, but we only get paid around EGP 1,000, and some of us have children,” said Al-Sheikh.

“The minister of education keeps ignoring us and ignoring our demands, we have been protesting outside the cabinet for two days and he didn’t even bother to send anyone to find out what our demands are,” Al-Sheikh went on.

He concluded by saying that they have a two-year contract that is renewed when the period is over, but they were not hired, which means that they can be dismissed at any time.

Protests were held in front of the Ministry of Education as well; however, nobody was willing to listen to our demands and they ignored us, said protestors.

They also said that they will go on a hunger strike in case their demands are not met, and they will not stop protesting until relevant changes occur regarding their work conditions.

Protester Eslam Waly told Daily News Egypt said that the Ministry of Education is always slacking when it comes to the rights of teachers. Waly mentioned that there was a case involving a teacher who was raped and another one who was beaten, but the ministry took no action.

According to the protestors, they protested in April in front of the cabinet and they were promised that their demands would be fulfilled, but then received no response.