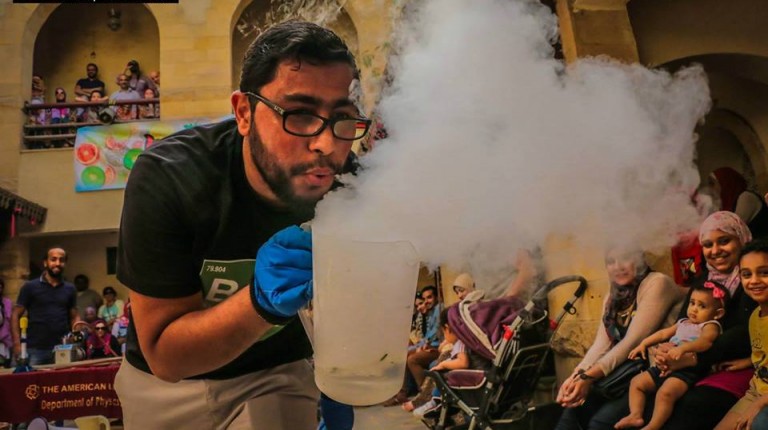 In a country where studying science is a trial for many students, the American University in Cairo (AUC) decided to spread science literacy and raise scientific awareness among public and private school students all over Egypt.

In cooperation with the Academy of Scientific Research and Technology, AUC’s Fun Lab holds regular scientific shows in which they blend physics and chemistry with fun, aiming to deliver knowledge in a more interactive and appealing way.

“We want students to understand that science is fun and simple through different facilities or channels that help create an edutainment environment,” said Mohammed Soliman, a science communication specialist at AUC. “The first channel is called the ‘Wonders of Science’ in which we conduct some experiments related to motion, temperature, and pressure using some chemical ingredients such as liquid Nitrogen to make a cloud or Hydrogen to make a small bomb to impress students.”

The second facility is the ‘Planetarium Show’ which introduces students to the visible planets, moons, stars, and galaxies and allows them to watch scientific films about astronomy, the cosmos, and colonisation of the moon.

“The third channel is the ‘Spinatory’, a spinning laboratory in a fixed place at the university where we invite school students who can enjoy games and practical experiments in a spinning room. We also have an annual summer camp for two weeks where we help students invent small cars, planes, robots, and speakers,” he added.

Until now, the initiative has organised about 400 shows across an impressive number of Egyptian governorates including Cairo, Giza, Sohag, Sharqia, Zagazig, Manoufiya, Gharbeya, Mansoura, Ismailia, and many others. Some of these shows were held in large clubs such as Heliopolis and El Shams.

“Before the show, we usually distribute questionnaires to the students asking them if they love science and why they do or do not love it. After the show, we distribute another one to find out how much the show managed to influence their perception of learning about science. We were surprised that a large number of students decided to convert to the scientific branch in their schools following the shows,” Soliman explained.

Currently, four specialists are working on this project. Their last show was held in Al-Moez Street on 19 May and attracted a large number of students and parents.

“We are planning to upload videos with simple explanations of some scientific experiments. We hope they will be successful,” he concluded.

At TedxCairo, several speakers on theme of continuum