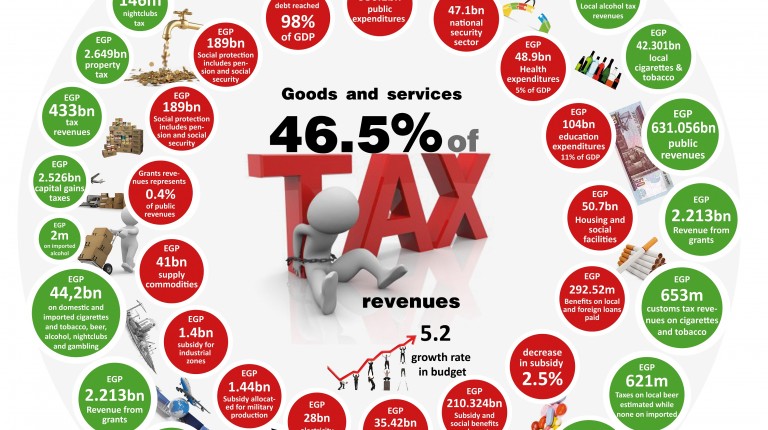 The government expects to increase public revenues to EGP 631.056bn as a result of the expansion of the tax base. In the new budget for FY 2016/2017, the government showed that taxes will be an important source for adjusting the new budget and estimated tax revenues at EGP 433bn compared to expectations of EGP 362bn for the current FY 2015/2016.

The government has imposed new taxes on citizens besides the old ones, such as the value-added tax (VAT) and real estate tax. Revenues from applying VAT and the real estate tax are anticipated to register EGP 631m.

Taxes on goods and services to amount to EGP 201.178bn

Tax on local beer is estimated at EGP 621m, with none on imported beer. Local alcohol tax revenues amount to EGP 215m; however, tax on imported alcohol reaches EGP 2m.

Customs tax revenues on cigarettes and tobacco amount to EGP 653m. The total target customs revenues on imports is estimated at EGP 29.1bn.

The second part of the new budget is public expenditure, which amounts to EGP 936.1bn. However public revenues amount EGP 631.056bn resulting in a gap of EGP 305bn.

Approximately 39% (EGP 368.3bn) of the expenditures is allocated for public services including legislative bodies, parliamentary, and executive councils, and local financial and supervisory departments, compared to EGP 321bn in the current budget.

Increase in health and education expenditure

EGP 50.7bn is dedicated to housing and social facilities in the new budget, double the amount allocated in the current budget, EGP 25.3bn.

Benefits on local and foreign loans paid by the government in new budget are estimated at EGP 292.52m, compared to EGP 244.44m in the current fiscal year.

2.5% decrease in funds allocated to subsidies in new budget

Overall subsidies were reduced by 2.5% in the new budget compared to the current budget.

Contrary to this, the military production subsidies increased dramatically in the new budget, rising to EGP 1.44bn compared to EGP 820m in the current budget.

Social protection, which includes pensions and social security, decreased to EGP 189bn compared to EGP 211.7bn in the current FY.

The minister of finance admitted that debt has reached 98% of GDP, which represents a major threat to the Egyptian economy, according to deputy director of the parliamentary Industry Committee Mohammed Saad Badrawi.

Saad Badrawi added that the Finance Ministry announced that it aims to achieve a deficit to 9.8% by the end of FY 2016/2017, which is the same targeted deficit during the current FY 2015/2016. Indications refers to more than 11% by the end of current FY in light of the lack of income, according to Badrawi.

The government is targeting a growth of 5.2% in the new budget and aims to reduce the deficit to 9.8% by the end of FY 2016/2017. However, these hopeful numbers face some challenges. Most pertinently, expenditure on wages, pensions, and benefits constitutes 60% of total expenditure. This is in addition to the increase in the payments deficit balance, which recorded $39bn during FY 2014/2015, and in turn led to a decline in foreign reserves.