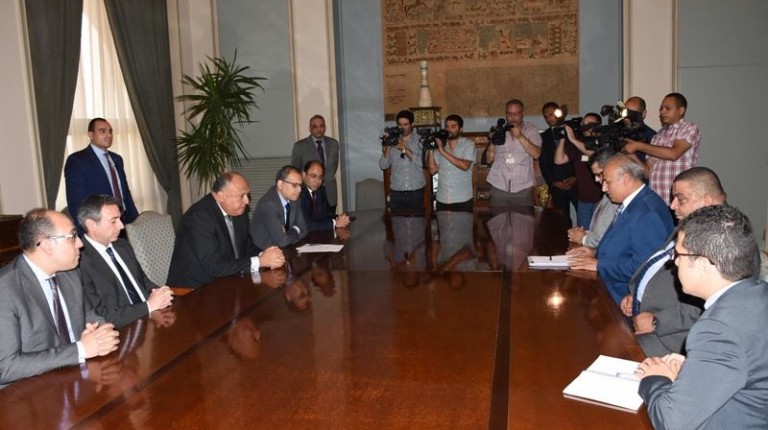 Egyptian Minister of Foreign Affairs Sameh Shoukry held a meeting on Tuesday with a Syrian opposition delegation to discuss the peace talks taking place in Geneva.

The delegation briefed the Egyptian minister on the Geneva talks, in which the delegation confirmed that they were keen to positively participate in it.

Geneva peace talks between representatives of the Bashar Al-Assad regime and opposition forces stalled earlier this month when the opposition suspended its participation. The decision came after the regime’s delegation refused to discuss a political transition.

The opposition’s proposal entailed the formation of a transition council. However, the Al-Assad regime advocated for enfolding opposition members into the government without displacing the current Syrian president.

All sides in the conflict must be consulted and Egypt will support the Syrian people, Shoukry said.

The Egyptian Foreign Ministry condemned the series of explosions that were carried out Monday by the Islamic State (IS) in Tartous, which left 150 people dead.

IS claimed responsibility for the deadly attack, saying that it was targeting the Syrian armed forces.

The attacks are the first of their kind in the coastal city of Tartous, where a Russian military base is also located.

The Kremlin said the incident confirms the need to revive the peace talks over Syria in Geneva, which stalled after a US-Russian backed ceasefire collapsed.

“This demonstrates yet again just how fragile the situation in Syria is … and underscores the need for new urgent steps to continue the negotiation process,” Kremlin spokesperson Dmitry Peskov told journalists.