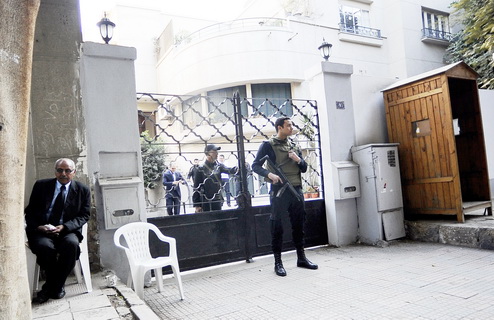 The head of programmes at the Cairo Institute for Human Rights Studies (CIHRS) Mohamed Zarea’ was banned from travelling at Cairo International Airport on Thursday over the investigations in the “NGOs foreign funding” case.

Zarea’ was on his way to Tunisia when he was stopped by airport security. “They informed me at Cairo airport that I am banned from traveling based on orders from the investigating judge,” he wrote on his Facebook account.

The CIHRS official joins a host of human rights workers and advocates whom investigation judges have issued travel bans against in the case, including names such as Gamal Eid, Hossam Bahgat, and Esraa Abdel Fattah.

The foreign funding case dates back to December 2011, when prosecutors, backed by the police, stormed the offices of 17 local and international NGOs, including the International Republican Institute, the National Democratic Institute, and Freedom House, as part of a probe into the NGOs’ allegedly illegal foreign funding.

Forty-three NGO workers were put to trial, including 32 foreigners, and were convicted of unlicensed work and receiving illegal foreign funds. Twenty-seven defendants, all foreigners, were sentenced to five years imprisonment in absentia, while another five foreigners received two-year sentences in attendance, and 11 Egyptians received a one-year suspended sentence and a EGP 1,000 fine.

The reopening of investigations in the case was condemned by rights organisations as an “orchestrated, escalating assault” on civil society in Egypt.