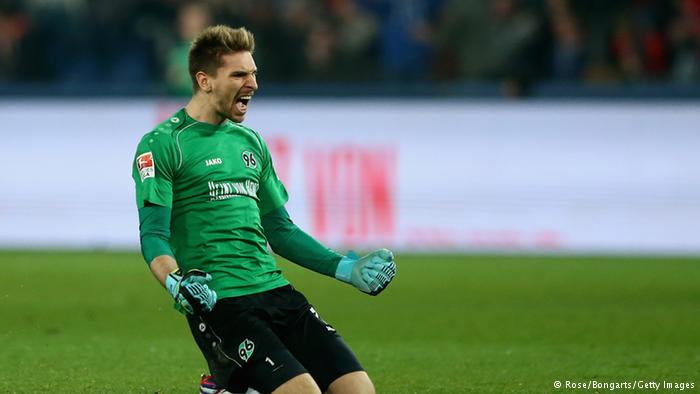 Headed to the second division, Hannover is set to part ways with star goalkeeper Ron-Robert Zieler. The club is allowing him to enter contract negotiations with English champions Leicester City.
Hannover announced on their website on Sunday that goalkeeper Ron-Robert Zieler will enter contract negotiations with Leicester City, the champions of England’s Premier League.

“Ron-Robert Zieler has made use of an option in his contract and informed Hannover that he will travel to English champions Leicester City for contract talks,” the statement read. It also revealed Zieler will also go undergo a mandatory medical.

“We always knew that with his exceptional quality, Ron would continue playing in the first division,” said Hannover’s sporting director Martin Bader as part of the statement. “Should the contract negotiations go well for him, we wish him all the best for the future.”

The Cologne native voiced his desire to leave the club last week in a Facebook post. “I am very ambitious,” he wrote. “And my goal is to play top-flight football in the coming season.”

Should Zieler join Leicester, he could face stiff competition from Dane Kasper Schmeichel for the first-team spot.

Zieler has spent the last six seasons with Hannover after moving to the club in 2010 from Manchester United. He has made 186 appearances for Hannover, missing just three games since becoming Hannover’s regular starter in 2011.

The 27-year-old goalkeeper has also made six appearances for the German national team and was part of the 23-man squad for the 2014 World Cup. Zieler is not part of Germany’s squad for this summer’s European Championship in France; Joachim Löw elected instead to take Barcelona’s Marc-Andre ter Stegen and Leverkusen’s Bernd Leno as backup for Manuel Neuer.