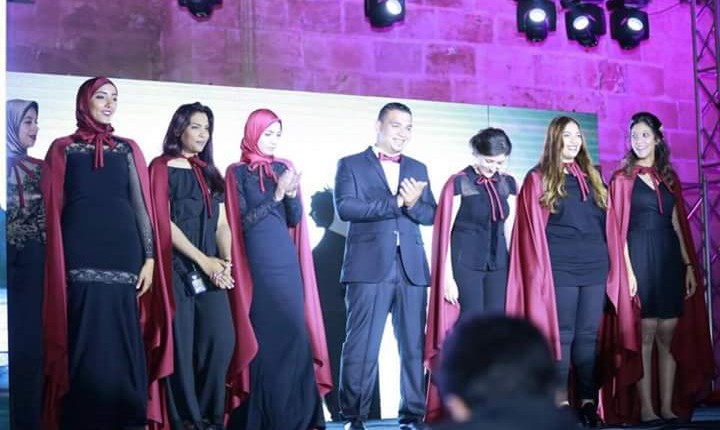 At Qaitbay Citadel, where history is forever at the present, the College of Language and Communication (CLC) hosted its first graduation ceremony in the presence of the president of the Arab Academy of Science Technology and Maritime Transport, Ismail Abdel Ghaffar, and CLC’s dean, Abeer Refky.

A number of well-know celebrities and public figures were keen to attend the ceremony to encourage the students and provide feedback about their work including Ramy Radwan, Khaled El Ghandoor, Sherry Adel, Ahmed Farid, and a large number of experienced directors such as Hany Lashin, Amr Abdin, Amr Abdel Aziz, and Batoul Arafa.

In spite of their young age and relatively short experience, the graduates managed to integrate new kinds of visual communication with the traditional print and broadcast media channels. They produced a number of short films, documentaries, TV shows, newspapers, magazines, radio podcasts, translated novels, info graphs, social ads, live shows, and plays. They chose “The Storytellers’ Debut” as the theme for their ceremony.

“The Storytellers’ Debut was the best title to describe how anyone can tell their own story and how the media can be an effective tool for enabling ordinary people to tell their stories that may carry suffering or hope,” said Rawan Anwar, one of the faculty seniors. “Every one of us was given the chance to tell the story of his or her theme in a different way. We interviewed people in the streets and listened to their stories and this is how we want to see the developmental role of media.”

The four graduation projects were based on thoughtful scientific research that discussed the crucial role the media should play in solving four important societal problems: the rise of materialistic values in Egyptian society, the spread of superstition, the feeling of alienation, and how people perceive beauty. The students’ live performance on stage helped convey their message to the audience and linked the presented visual materials together.

After welcoming the guests and parents, Abeer Refky, the dean, gave a short introduction about the mission of the faculty and its remarkable agreement with Autonoma University in Barcelona, Spain. She asserted that CLC is trying to provide a new vision for teaching media and language in a complementary way which makes it the first of its kind in Egypt. Then, she honoured the faculty staff who have exerted great efforts to help students produce such projects including Yasser El Shamy, Amira Ehsan, Laila El-Saeed, Iman Mahfouz, Rana Khaled, and Eman Essam.

After that, Ismail Abdel Ghaffar, the academy president, gave a short speech in which he put an emphasis on the bright future of the faculty and promised to make it one of the highly ranked colleges in the world within a few years.

For the students, it was a great challenge to perform in front of a large audience for the first time. However, the four groups amazed the audience with their presence, well-prepared dialogues, and the quality of the printed and visual items they presented.

“The graduation project was a perfect platform to practice and display what I learned over the past four years,” said Nour Gharbo, one of the graduates. “It was an overwhelming experience. We went through hard times together but it was so rewarding to see the final outcome of each project. I was really proud.”

A few days after the ceremony, the faculty held a press conference in which representatives from the different national, private and partisan newspapers were invited to discuss the graduation projects. After presenting the films and visual materials, the head of the Al-Masry Al-Youm office in Alexandria Nabil Abou Shal, the vice president of Al Jomhoriya newspaper Shaaban Essawy, and the head of Al-Wafd newspaper’s office in Alexandria El Sayed Saeed, ONTV channel correspondent Ibrahim Fawzy, and many others praised the work of the students and offered them some training opportunities.

“We selected some issues that concern the ordinary citizen and touch his everyday life,” Amira Ehsan, CLC Student Affairs deputy, said during the conference.  “In addition to the visual communication tools that were employed, our students translated four different novels that tackle the same four themes they previously selected. The authors come from different countries and backgrounds and that was intended to expose the students to different cultures and see how this affected the literary works they produced.”

However, she believes that education is an ongoing process that never ends and students must keep learning and improving their talents and skills. The journey of a thousand miles is about to start.

“I’m looking forward to starting my career in media and I am sure that I will dedicate all I’ve learned to benefit people and improve the media to serve people’s needs more,” Rawan Anwar concluded.