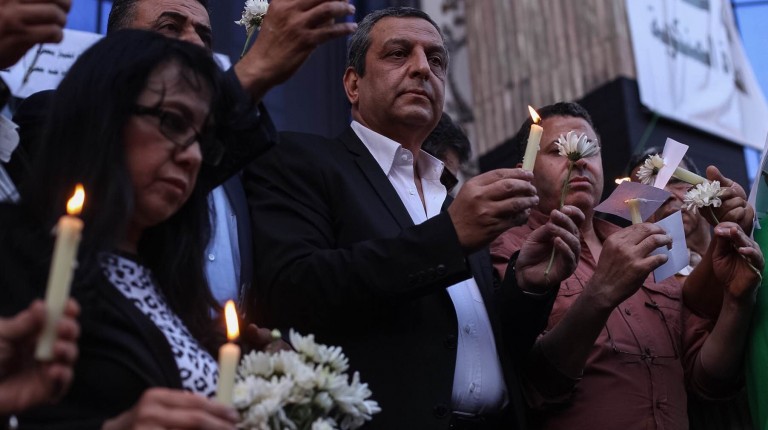 After over 12 hours of investigations, another unprecedented incident concerning the press took place on Monday: the top three leaders of the Press Syndicate, including the head of the syndicate, have been detained over charges of “harbouring suspects” and “spreading false news”.

Dozens of journalists and supporters gathered outside Qasr El-Nil police station in Cairo’s downtown to await the fate of the Press Syndicate leaders who spent their night detained in the police station. Veteran press unionists and prominent journalists have been showing up since the morning to express their support for syndicate head Yahia Qalash, secretary general Gamal Abdelrahim, and the Freedoms Committee’s rapporteur and undersecretary of the syndicate Khaled El-Balshy.

The trio was interrogated by the prosecution on charges of hosting Yanair Gate’s editor-in-chief Amr Badr and journalist Mahmoud Al-Saqa inside the syndicate building last month and publishing false news about their subsequent arrest.

Badr and Al-Saqa were arrested from inside the syndicate on 1 May, causing an uproar among civil rights movements, leading the syndicate to call for the sacking of the minister of interior.

Syndicate board member Hanan Fekry detailed to Daily News Egypt on Monday the length of investigations with the leaders of the syndicate.

“The first investigation began around 2pm with El-Balshy, and it ran for four hours then almost two and half hours with Abdelrahim, then the investigation with the head of the syndicate started at about 9pm and lasted until 3.15am or 3.30am,” Fekry said.

“I attended the investigations with the head of the syndicate and I haven’t seen this amount of false testimonies in my life in one case,” she added.

The prosecution ordered the release of the three leaders on bail of EGP 10,000 each. The three journalists refused to pay the bail.

“Leaders of the Press Syndicate don’t pay bail, especially when the case is about innocent people and considering the false testimonies … it wouldn’t be possible for them to accept [to pay bail for release] this was their opinion.”

“We let them in on our opinion and we told them that we don’t want them to be detained, because one of the scenarios is that they will be detained for four days pending investigations.”

Defence lawyer Amr Imam told Daily News Egypt: “We are now waiting for the general attorney’s decision on whether the prosecution will summon them for further investigations, release them, or detain them for four days pending investigations.”

They also demanded an investigating judge take over the investigations in the case instead of the prosecution, for fear of a lack of neutrality by the prosecution following a report it published earlier this month which the syndicate board considered “pre-judging”.

When asked about the omission of syndicate claims from investigations, Imam said the justice system in Egypt is selective.

“They choose what they want to do at the time they want. The same goes for releasing or detaining someone. These are political manoeuvres to score political gains,” he explained. “Since the investigations began with Badr and Al-Saqa, the term ‘storming’ isn’t there.”

Imam believes the investigations with syndicate leaders are meant to especially target El-Balshy for his stance on the maritime demarcation deal between Egypt and Saudi Arabia, which saw the transfer of two Red Sea islands to the Gulf kingdom.

Following the Egyptian-Saudi agreement in early April, mass protests were hosted at the press syndicate on 15 April to object to the agreement. In the general assembly meeting on 4 May, board members said this was a main reason for storming the headquarters.

Badr and Al-Saqa are accused of inciting for protests and publishing “false news” on the matter, among other charges.

“Unprecedented escalation” is how journalist and politician Khaled Dawoud described the situation.

He told Daily News Egypt that, in the 75 years since the Press Syndicate was founded, a head of the syndicate or board members have never been detained for “doing their job and sticking to their rights, and executing the demand they were elected for which is providing security for journalists”.

“We are living through one of the worst periods according to what we’ve been told in the investigations. The journalists are faced with statements [accusation evidence] from the press and their posts on social media,” he added.

Dawoud, a former spokesperson for Al-Dostour party, commented on the fairness of the investigations, saying that the prosecutor general’s stance in the case against the journalists is clear, despite him being an investigative authority.

The remaining members of the syndicate board are to hold a meeting to decide on their reaction to the current situation, according to Fekry. The meeting is to precede a protests announced by angered journalists waiting outside the Qasr El-Nil police station.

The protest at 5pm is scheduled to take place on the stairs of the syndicate headquarters.