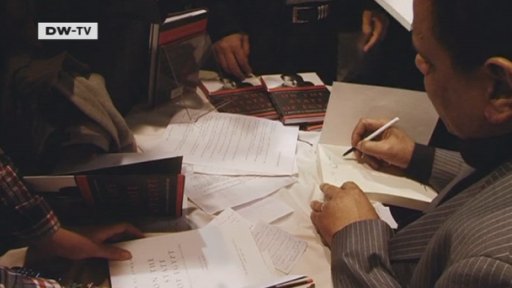 Best-selling novelist Alaa al-Aswany one of the main protagonists in the 2011 Egyptian uprising, and remains a high-profile government critic. He spoke with DW about his work and his struggle against dictatorship.
DW: You’ve always been optimistic as to the future development in Egypt. In 2013 you said: “I believe in people and in the revolution.” Do you still feel the same today?

Alaa al-Aswany: Absolutely. I’m not happy with what is happening in Egypt, but I’m optimistic. And I’m optimistic for objective reasons. Because I read the history of revolutions and I know that it takes time.

As co-founder of the Kifaya (Enough!) civil society movement, what is your judgment in retrospective? When did the Arab rebellion take a wrong turn?

You have called President Abdel-Fattah el-Sissi a new Mubarak. Has Egypt turned into a military dictatorship?

Since 1952, we as a people have been torn between two terrible choices: a dictatorship with army support, and a religious fanatic dictatorship. The revolution has been a project of the third path: to build up a democratic state which is not religious, and not military.

No. Calling the Muslim Brotherhood terrorists is absolutely justified. After the military intervention in 2013, they burned around 200 churches and killed many people. That was the context in which I said they are terrorists.

The reason why I and many millions of Egyptians called for an early presidential election was Morsi’s decree in November 2012, which cancelled the democratic system and Egyptian law, making Morsi a kind of Turkish sultan. And that was not acceptable to anybody. I’m absolutely against the massacre of the Muslim Brotherhood members, and I’m against the repression by the current regime. But I’m also against the decree made by [Morsi] because that was the act of a dictator.

In 2013 you supported the military, but now many of the revolutionaries you stood with are in prison. Are you yourself under attack?

Yes, I have been under attack from the beginning. Egyptians asked for an early presidential election, there were millions of people in the streets, because they didn’t trust Morsi – nobody trusted him.

[At the time], there were thousands of Islamists calling – and you could find that on YouTube – calling for the killing of the other side, killing the millions who are against the Muslim Brotherhood. There were speeches by these people, saying they will create rivers of blood. The military intervention to prevent a civil war, in my opinion, was the duty of the army. But the military intervention should not have meant that the army could rise to power.

I never supported el-Sissi as a president. And I wrote – at that time I was allowed to publish in Egypt – I wrote that the election of el-Sissi was not democratic, and I gave examples. That’s why I’m under attack. For the last two years, I have not been able to publish my articles. I am under attack in the media, banned from TV appearances. I don’t feel comfortable at all.

Have you ever considered leaving Egypt?

I am able to stay abroad. But I’m not going to leave Egypt unless obliged. I want to stay in my country like anybody else. But at some point, if I feel I am obliged, I will leave.

How does censorship in Egypt work?

We have official censorship for show business: for TV, for theater and for the cinema. But even for books and newspapers, we have strong censorship enforced in an unofficial way. All the TV channels and newspapers in Egypt that aren’t state-run are owned by businessmen. And these businessmen, they don’t need any problems with the regime. Just one phone call from anyone linked to security to any businessman in Egypt is enough to cancel a writer’s contract, or to ban any speaker from a TV appearance. I have friends who were banned, and that’s what happened with me. The newspaper owner did anything to get me to leave, and then he never asked me to write again. Censorship is indirect. It’s not visible, it’s not official, but it’s very strong.

Is that why you started writing a weekly column for DW’s Arab service?

I am committed; it is my duty to write. I’ve been writing weekly columns for years. This is the first time that I haven’t been able to write for two years. It happened under Mubarak, but only for three months. DW has a very good professional reputation, and will give me the chance to transmit my ideas and my articles to a very broad spectrum of readers, both in Egypt and abroad.

Foreign NGOs are under pressure in Egypt. How do you see Europe’s role in Egypt, and its claim to stand up for human rights?

You’re a best-selling author: in Egypt alone, your novels (“The Yacoubian Building,” “Chicago: A Novel” and “The Automobile Club of Egypt”) have each sold more than 100,000 copies and have been translated into 30 languages. “The Yacoubian Building” was even made into an internationally acclaimed movie. How do you divide your time as an activist and a writer – and are you still working as a dentist?

Yes. I cannot write fiction more than five to six hours a day. And I only write in the early morning, I cannot write late. So I wake up at 6 a.m., 6:30 – and I’ve been doing this for years – and I write for five or six hours. After that, I become a dentist. I have my clinic in the same house, and go downstairs to see my patients. It’s very useful for the novelist to have contact with people every day.

Do you still work politically?

In Egypt, we don’t have politics because we don’t have a democracy. It’s a struggle for democracy, not politics. For that reason any writer, not only myself, is committed to take part in this struggle. Writing is basically a kind of artistic defense of human values. You write to defend freedom, to defend human rights. It’s part of your duty to be in the struggle for democracy.

What are you working on at present?

I’m working on a new novel, which I hope to finish by the beginning of next year. I’ve been working on this novel now for about three years. It always takes me three to four years to finish a novel – it’s a lot of work, a lot of research.

Does it already have a title?

Yes: “The Republic As If.” The idea is that in a dictatorship, the only truth is the dictator. Everything looks as if it were true, but it’s fake.

Alaa al-Aswany, born in 1957, may well be Egypt’s most prominent living writer. His novels are extremely successful in the Arab world and beyond. Between his work as a dentist and novelist, al-Aswany remains a high-profile critic of President Abdel-Fattah el-Sissi. In May, he began publishing a weekly column for DW’s Arab service.

This interview has been condensed and edited for clarity.

Review: The media, Qatar and businessmen

Mubarak tells parliament he plans to continue with democratic reforms