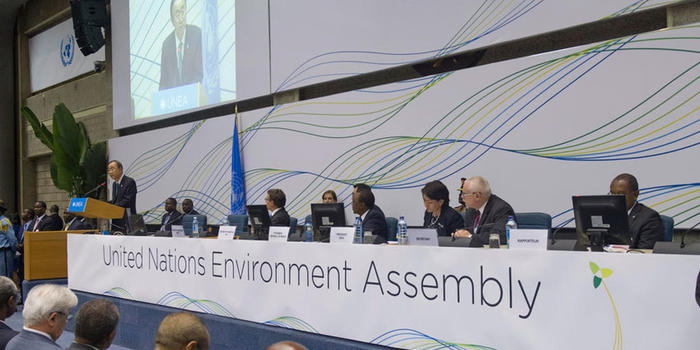 Chair of the African Diplomatic Corps’ (ADC) Technical Committee Yvonne Khamati sent on Sunday a memorandum to ADC’s dean, Kelebert Nkomani, criticising the misconduct of an Egyptian official during the second session of the United Nations Environmental Assembly (UNEA2).

Egypt’s deputy minister of environment and head of the Egyptian delegation allegedly made racist comments during the session describing African delegations as “dogs and slaves”.

“Best way to end this is for Egypt’s Ministry of Foreign Affairs to apologise to Africa through the African Union,” she added.

In response, Egypt’s Foreign Ministry denied in an official statement that such comments were made. However, Foreign Minister Sameh Shourky ordered investigations in order to find out what exactly happened during the session.

Further, the ministry strongly rejected the memo sent by Khamati as they claimed it distorts Egypt’s image without having concrete evidence on what has happened.

“It is not acceptable to appoint frail accusations against Egypt that doubt its loyalty to the African continent after all the efforts it has made and still doing that will eventually serve its interests,” the statement read.

The Egyptian embassy in Nairobi will send a memo to the African Ambassadors Council in Nairobi against the claims made by Khamati, the statement added.

According to a copy of the memo, Khamati on behalf of the ADC said the comments made by the Egyptian delegation: “have no place in the unity of Africa. They are uncivilised, undiplomatic, degrading and insulting of the fabric of Pan-Africanism and undermine these principles.”

“Africa has lost trust and faith in their leadership and we do not believe that they have the moral standing to represent the interest of Africa in any negotiations,” the memo added.

Further, the memo demanded an apology from Egypt at the highest level; that Egypt steps down from presidency of the African Ministerial Conference on Environment (AMCEN); and that Egypt generally does not take part in any negotiations on behalf of Africa.

The incident sparked controversy on social media platforms. Several Egyptians on Twitter started using the hashtag ‘We Are Sorry Africa’ to send apologies to Khamati and the African delegations, saying “it does not represent us”.

Egypt has been leading negotiations on African affairs in many recent occasions. In May, while Egypt headed the UN Security Council, Shoukry vowed to push African issues forward and put the spotlight on security challenges facing the international community.

Moreover, during the 21st session of the Conference of the Parties (COP21) on climate change in Paris, Egypt advocated for adaptation needs rather than mitigation measures for all Africa, believing it is the most vulnerable for climate change effects with least contributions to worldwide greenhouse gas emissions.