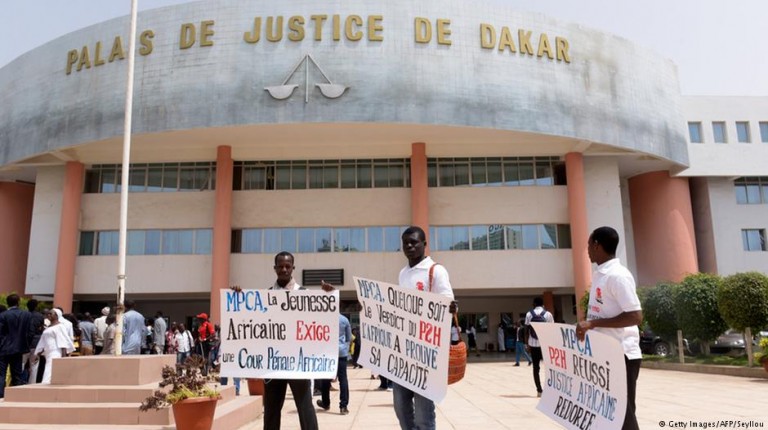 There were scenes of celebration as victims of Hissene Habre’s eight-year dictatorship gathered in the Senegalese capital, Dakar, to hear his sentencing. Habre’s case was heard by the Extraordinary African Chambers, a special criminal court established by the African Union under a special deal with Senegal.

“The feeling is one of complete satisfaction,” said Clement Abaifouta, president of the Habre survivors association, which is known by the acronym AVCRHH.

Following the verdict, victim groups were visibly moved as they embraced each other. Abaifouta said the judgment was the “crowning achievement of a long and hard fight against impunity.”

“Today Africa has won. We say thank you to Senegal and to Africa for judging Africa,” he added.

There were also similar scenes in the Chadian capital N’Djamena, where up to 250 victims and their supporters watched the trial on television at the group’s headquarters.

Women screamed with joy as the verdict was read out, shouting “We won!”, before taking to the streets and blocking traffic as they spread the news.

Habre’s case marked the first ever trial of a former head of state in sub-Saharan Africa. The 73-year-old faced the jury on several charges of war crimes and crimes against humanity, including rape and sexual slavery. Human rights groups accused Habre of being responsible for the deaths of 40,000 people during his rule from 1982 to 1990.

More than 90 witnesses testified during the trial, which began in July 2015. Victims were subject to electric shocks and water boarding, while some had gas sprayed in their eyes or spice rubbed into their genitals, the court heard.

According to legal experts, the precedent set by the verdict could be seismic. It follows years of criticism that African leaders tried by the International Criminal Court (ICC) in The Hague were not judged on the African continent. Habre’s conviction for personally raping a woman was also a first by an international court trying a former world leader, according to Human Rights Watch (HRW).

The former dictator claimed that the proceedings were politically motivated, and refused legal representation, though the court appointed Senegalese lawyers for him. Habre fled Chad in 1990 and has lived in the Senegalese capital, Dakar, since then. He was detained in Dakar in July 2013.

‘Nobody is above the law’

UN High Commissioner for Human Rights Zeid Ra’ad Al Hussein said Monday’s verdict showed “nobody was above the law” at a time when the world was “scarred by a constant stream of atrocities.”

Similarly, Reed Brody – a lawyer for HRW who has spent the last 15 years working with victims to convict Habre – said the ruling was a warning.

“This verdict sends a powerful message that the days when tyrants could brutalize their people, pillage their treasury and escape abroad to a life of luxury are coming to an end,” Reed said in a statement.

“Today will be carved into history as the day that a band of unrelenting survivors brought their dictator to justice.”

Ahead of Monday’s ruling, victims’ lawyers said their next step would be to secure compensation for their clients in a civil suit.