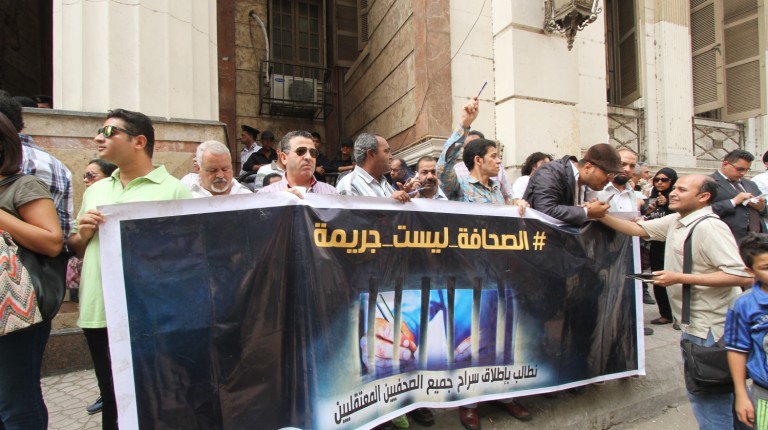 They face charges of harbouring wanted journalists inside the syndicate headquarters and propagating false news.

In late May, Qalash, head of the Freedoms Committee Khaled Al-Balshy, and the syndicate’s secretary general Gamal Abdelrahim spent a night in police custody after refusing to pay EGP 10,000 bail each following an investigation session by the general prosecution.

The three were escorted from the prosecution headquarters after investigations that spanned from last Sunday evening until the early hours of Monday morning at the Qasr Al-Nil police station.

They were interrogated by the prosecution on charges of hosting Yanair Gate’s editor-in-chief Amr Badr and journalist Mahmoud Al-Saqa inside the syndicate building in April and also “spreading false news”. Personnel from the Central Security Forces (CSF) prevented journalists from attending the first session of the trial.

Hundreds of journalists gathered in front of the court building and organised a silent protest carrying banners that called for the freedom of the press.

Several prominent figures attended the trial, including a delegation from the Lawyers Syndicate and former presidential candidate lawyer Khalid Ali who noted in press statements that the target of the trial is to send a message of terror to journalists.

“The head of the Press Syndicate is being today tried for hiding wanted journalists inside the syndicate. How could two journalists hid in a public building under the watchful eye of the government?”  Lawyer Khalid Ali told Daily News Egypt on Saturday.

He added that it is not only Qalash who is being tried “over meaningless charges” but also the former chief of the Central Auditing Agency (CAO), Hesham Genina, who is facing charges over “revealing the truth of corruption in Egypt”.

Khalid Ali, who is a member of the syndicate leaders’ defence team, said that the staff asked the court for sufficient time to review files of the case and to allow the defence to prepare arguments as well as asking for an official copy of the warrant made by the prosecution to arrest Badr and Al-Saqa.

Badr and Al-Saqa were arrested inside the syndicate on 1 May, causing an uproar among the civil rights movement, leading the syndicate to call for the sacking of the Minister of Interior.

Before entering the trial session, the syndicate’s secretary general said in press statements to the gathered journalists on Saturday that the three syndicate leaders were keen to attend the first trial session to show respect for the enforcement of the law.

“The Press Syndicate will remain the castle of freedoms. We faced false charges during prosecution investigations. The main charge was harbouring  Badr and Al-Saqa. The head of the Press Syndicate made calls with the Interior Ministry to deliver them before the storming of the syndicate by security forces,” Abdelrahim stated.

Following the first session of the trial, the leaders held a press conference inside the syndicate headquarters where they said they asked the prosecution on behalf of Press Syndicate for a copy from the investigation minutes carried with them last Sunday, but their demand was refused, according to Abdelrahim.

“We are now considering holding a new general assembly to follow up on the execution of the previous decisions made by last the general assembly regarding state security’s storming of the Press Syndicate. All perpetrators of the break-in should stand trial,” said Abdelrahim during the press conference.

Both Qalash and Al-Balshy consider the trial an attempt to manipulate the facts in order to depict the storming of the syndicate as an ordinary security measure.

“Journalists are being persecuted and assaulted by the current regime; this case is considered a fierce attack against press freedom,” said Al-Balshy during the press conference.