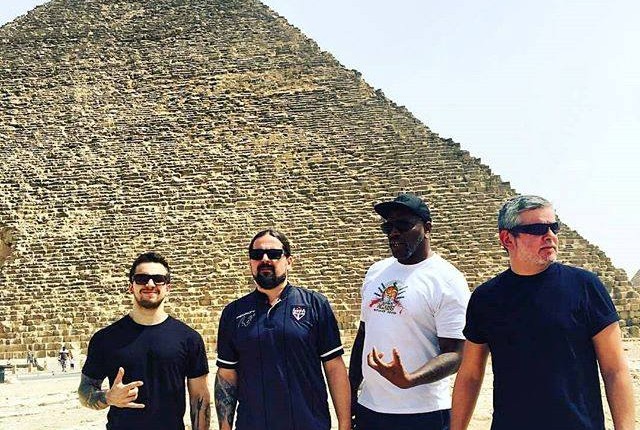 American-Egyptian metal singer Nader Sadek was reportedly arrested by police in Giza on Saturday evening, according to posts on metal fan pages in Egypt.

Nader was the organiser of a concert for the Brazilian heavy metal band Sepultura. The band was formed 25 years ago and plays a mix of death metal, thrash metal, and groove metal.

The concert was scheduled to be held on Saturday evening at the Nile Country Club, but this was changed to a villa in a Giza compound, according to Metal Bell Magazine.

The magazine reported the arrest and raised questions over the actual reason behind the concert’s cancellation. It suggested that the unexpected rain could have been a factor, or maybe the sudden venue change meant that permits were no longer valid, or perhaps no permits were even issued in the first place.

“Here at Metal Bell headquarters, we are still waiting for a clarification from Nader as soon as this commotion ends, and we will update you as soon as we have further information. Stay tuned,” the Metal Bell magazine report issued on Saturday read.

The Interior Ministry’s media office was not available for a comment on the incident at the time of print.

Head of the Giza Security Directorate, Ahmed Hegazy, said that the main reason for the suspension of the concert was the lack of necessary permits for the show. Police forces stormed into the villa and physically stopped the concert on Saturday, according to state-run Al-Ahram.

Security personnel negotiated with the organisers and asked the audience to leave the vicinity of the villa, Hegazy added.

Earlier this year, heavy metal fans in Egypt were shocked when they faced accusations of being devil worshippers and part of the occult for attending a concert in which singers were dressed in black, and wore black and white makeup and face paint.

The story started when Sadek decided to hold a concert for the metal band Inquisition at a small platform in downtown Cairo.

Egyptian singer and head of the Musicians Syndicate, Hany Shaker, said live on TV that the syndicate was informed of an illegal concert being held downtown Cairo. “The devil worshippers were dressed in a very weird style and drew their makeup in the shape of a pentagram,” he said. “They wore leather jackets with stars on the back and that is strange.”