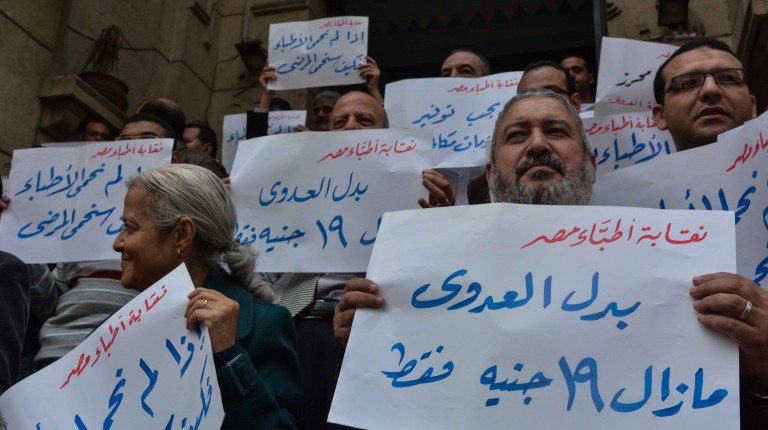 The State Council ratified on Saturday the decision to increase the compensation for doctors who are infected while on duty up to EGP 1,000, after the cabinet issued an appeal against the decision in November 2015.

The cabinet had earlier issued an appeal against the decision claiming it would be a burden on the state budget amid a surge in the number of doctors practicing.

Ihab Al-Taher, a Doctors Syndicate board member, said the verdict represents only an initial step on the road. “The cabinet should now start taking necessary procedures to officially announce the decision.”

According to Al-Taher, in case the decision is not executed, there will be another lawsuit filed against the entities or individuals who refuse to proceed with it.

“We hope that the cabinet proves its respect to the judiciary and proceeds with the decision without temporisation,” he further noted.

The historic court decision of increasing the infections compensation rate from only EGP 19 to EGP 30 and then to EGP 1,000 following the death of a doctor, Dalia Mehrez, in Ismailia after she was infected with the Meningitis virus during her work.

Mehrez’s death sparked anger and concerns among doctors who protested in demand of increasing the infections compensation rate given the high possibility of infection in their work environment.

A Doctors Syndicate lawyer, who filed a case at the State Council calling for an increase in compensation, previously told Daily News Egypt that he received 30 cases of doctors who have been infected by viruses in the course of their work since late 2014, including one doctor who had died. However, he argued that the numbers are far from the reality, as many doctors opt not to reveal that they were infected.

A report released by the Egypt Centre for Economic and Social Rights (ECESR) in early June said the amount of governmental expenditures on healthcare in Egypt is 5.4%, which is far less than other countries in Africa, such as Djibouti, where healthcare expenditures are upwards of 14%.

Hospitals with no equipment for preventing viruses should not operate: Al-Taher

30 doctors infected by viruses during work since late 2014: EMS lawyer