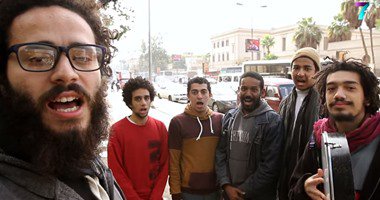 The East Cairo prosecution renewed on Sunday the detention of five members of the band Street Children for 15 days pending investigations.

This is the third detention renewal the band members have received since they were arrested in early May.

The musicians were arrested on charges of attempting to overthrow the regime, publishing offensive videos, inciting demonstrations, and spreading false news, according to lawyer Tarek Al-Awady, who attended the investigations with the band members.

Several lawsuits were filed against the band members accusing them of “religious contempt”. However, Adel Ramadan, a legal officer at the Egyptian Initiative for Personal Rights (EIPR), previously told Daily News Egypt that bringing up the issue of religious contempt is an obvious attempt by some media outlets to create social backlash.

Ramadan added that the general prosecution did not specifically investigate the video in which the band members mocked religious radio shows, but some media and religious figures discussed this video in particular in order to distort the band members’ image.

Prior to the band members’ arrest, Ezzidin Khaled, the youngest member in the band, was arrested on 8 May, on charges of publishing inappropriate videos online, which stirred controversy among social media users who contested that sarcasm is not a crime.

Khaled was released one day after he was arrested. However, the remaining band members were arrested by order of the prosecution on 9 May on charges of publishing inappropriate videos and inciting protests.