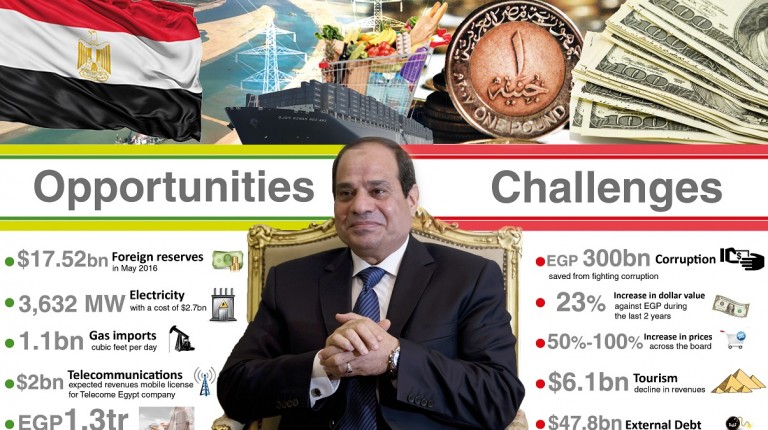 Wednesday marked the middle point of President Abdel Fattah Al-Sisi’s four-year presidential term. At the start of his term, which began on 8 June 2014, Al-Sisi made great promises regarding Egypt’s economic future, ensuring the public that he would put the country back on track towards a future of prosperity.

However, the economy’s recovery, both in speed and in substance, has been weak. With tourism at an all-time low, a scant amount of foreign direct investment due to concerns over political stability and the lack of security, Egypt’s problems have multiplied while its economy has declined.

On the occasion of Al-Sisi’s two-year anniversary as president, Daily News Egypt looks at the circumstances of different economic sectors two years after Al Sisi’s rule, what has been accomplished, and the obstacles that threaten the stability of his rule.

Al-Sisi’s regime is still shackled with a number of economic challenges that threaten the hoped for economic growth needed to improve the lives of many Egyptians.

The most prominent obstacles include the lack of foreign currencies, the devaluation of the Egyptian pound value against the US dollar, a tourism sector that is slowly dying, the increase of prices on the majority of the basic goods, and bureaucracy and corruption, which Al-Sisi himself admitted was the main obstacle to achieving growth during his interview a week ago.

Al-Sisi, however, managed to bring about significant improvements in sectors like electricity, which no longer see regular black outs, due to an increase in the flow of gas and electricity to plants and the country’s petroleum explorations. He also moved towards enhancing investments in the communications sector by paying more attention to locally manufacturing mobiles.

Several news agencies believe that Al-Sisi’s reforms in terms of the economy are good but not enough to improve the lives of Egyptians.

Evaluating Al-Sisi at the two-year mark