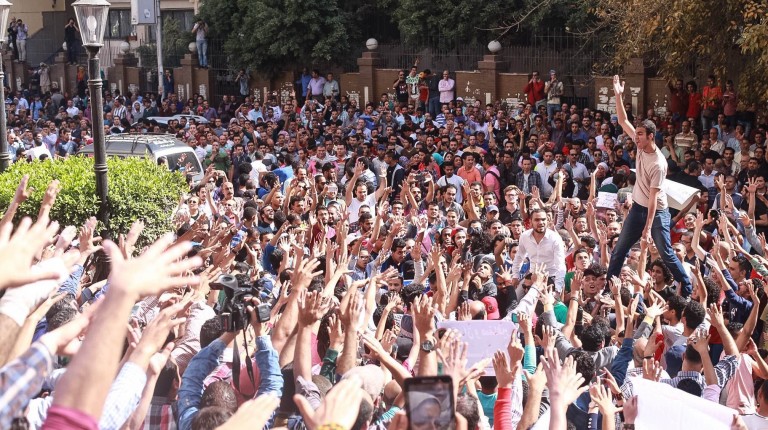 The state-affiliated National Council for Human Rights (NCHR) welcomed the government’s announcement of seeking to amend the controversial Protest Law.

Mohamed Fayeq, NCHR’s president, issued a statement Thursday in which he referred to amendments to the law organsing the right to public assembly and hold peaceful protest, as suggested by the council back in October 2013.

NCHR stressed upon the necessity to maintain a balance between achieving security and protecting human rights, without “a bias to either one at the expense of the other”.

The council saw that the existing law, issued under former interim president Adly Mansour in 2013, did not differentiate between the right to protest and crimes – already penalised by the criminal and penal codes – such as the destruction of public facilities, the attack on public institutions and so on.

“These articles should be removed from the law as they are unrelated to the concept of peaceful protesting that Egyptians earned after the 25 January Revolution, heavily paying the price through hundreds of martyrs and thousands of injured, and will not give up their right, especially that experience has showed that citizens do not get their rights unless there is group pressure which are mainly peaceful protests and strikes,” NCHR’s statement read.

This comes as the Ministry of Legal and Parliamentary Affairs, headed by Magdy Al-Agaty, decided to form a special committee to look into amendments to the law based on directions from Prime Minister Sherif Ismail, which will include the ministries of justice and interior, according to state media. Al-Agaty told Al-Ahram that suggestions sent by the NCHR and other human rights NGOs are to be considered in the process.

MP Anwar Sadat, who heads the Human Rights’ parliamentary committee, said Thursday that the amendments need to be carefully examined so that the outcome is correct, in light of “many opinions in favour of drafting a completely new law”.

In a press statement, Sadat also highlighted the need to review the statuses of “the victims of the Protest Law who were not involved in any acts of violence or destruction and should be released from jail.”

The Socialist Popular Alliance Party (SPAP), which welcomed the cabinets new initiative, also said in a Thursday press release that it demanded that the law consider the protection not the obstruction of the right of peaceful public assembly, that security bodies should not use veto-like rights in preventing such assemblies, in addition to demanding the release and pardons of “detainees of conscience”.

Many young activists have been persecuted and detained under the Protest Law, the most recent being four groups of hundreds over protests they held to express their rejection to a maritime borders agreement that would transfer sovereignty of the Red Sea islands of Tiran and Sanafir to Saudi Arabia.