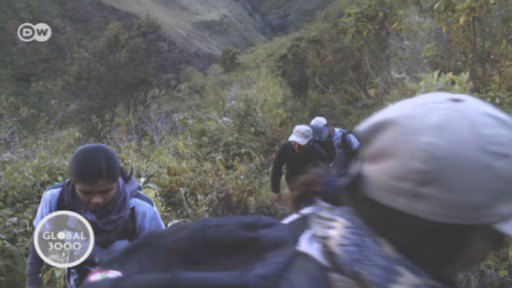 Corn and goats are the snacks of choice for spectacled bears. But their eating habits are bringing them into conflict with disgruntled farmers in Peru. Some groups there are trying to smooth over bear-human Relations.
Project goal: Protecting the remaining population of the spectacled bear and the natural resources in Peru’s Manu Biosphere Reserve, and to reduce human-wildlife conflict
Project partners: International Climate Initiative (IKI) and the Frankfurt Zoological Society
Location: Manu Biosphere Reserve, Peru
Project volume: 2 million euros
Project duration: Nov. 2012 to Oct 2017
Key species: Manu National Park holds world records for bird, reptile and amphibian diversity. It is home to the spectacled bear and the giant otter, among other species.

Manu is one of the most biologically diverse national parks on earth. It reaches from the Peruvian Andes down to the lowlands of the Amazon – and from mountain forests dense with fog 3,000 meters above sea level, down to the depths of the tropical jungle. Rare birds, reptiles and insects make their homes here. This includes more than 200 species such as jaguars and pumas – and the spectacled bear.
Tremarctos ornatus is the only bear native to South America. Around 25,000 individuals are believed to be left in the wild. Their habitat is becoming smaller, thanks to climate change and deforestation. Expanding agriculture is a problem for the bear as well. The animals are increasingly coming into conflict with farmers, when they snack on corn or goats.
This Frankfurt Zoological Society project is studying spectacled bears and trying to find ways to prevent human-bear conflict.

A film by Carl Gierstorfer