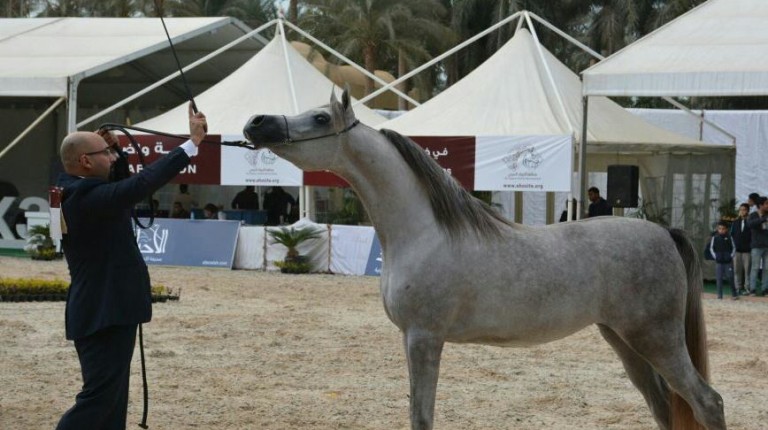 Sakkara Country Club, in cooperation with El-Sheikh El-Kasimi from the UAE, recently held its first three-day competition for the most beautiful Straight Egyptian horse.

This competition was aimed at supporting Arabian horses, which are famous for their beauty, with a focus on Straight Egyptian horses in particular.

Several factors determine whether a horse wins, such as its legs, body, and the way it moves.

The third day consisted of a competition between the top two winners of each division. The final  “Gold Horse” winner was awarded  EGP 100,000.

Daily News Egypt attended the event and met with horse owners to find out why they participated in the competition.

Mohamed Ali, owner of Al-Motahidoun Farm, which breeds Arabian horses, said that Straight Egyptian horses are the best quality horses, not only among Arabian horses but among horses worldwide.

There are five annual festivals that honour Straight Egyptian horses in Egypt. Sakkara Country Club’s event is the newest of them and it plans to make the contest a yearly event. The other festivals include the Al-Zahraa Station Festival, which occurs every November. Two other annual events are celebrated in the Al-Sharkia and Al-Behira governorates. Finally, the Arab Horse-Keepers Association puts on an event every year, which is hosted by El-Sheikh Khaled Ben Laden’s farm.

Despite this number of annual events, Ali said that “we need to support more of this kind of championship in Egypt, because countries such as the Emirates, Kuwait, Qatar, Italy, and France, already celebrate many events for the Straight Egyptian horse.”

Ahmed El-Fil, the owner of Fila Farm, said that he usually enters five or six horses in these competitions. However, he only presented two at the Sakkara Country Club.

El-Fil was keen to participate in this competition to show the quality of horses his farm produces.

El-Fil, however, believes that this kind of horse, is not a straight breed (meaning it is not a pure breed), and from time to time, Straight Egyptian horses are able to beat these mixed breeds in competitions.

He added that participating in this competition, aside from being enjoyable, is a form of marketing for his family’s breeding programme. It also serves to determine how their  horses fare against horses from other farms.