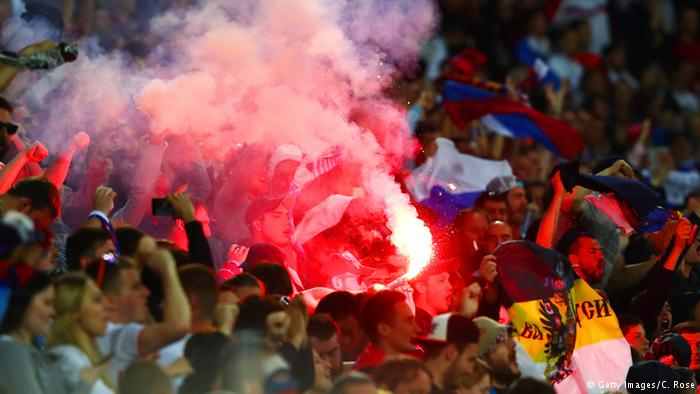 There are two games going on at Euro 2016 in France now – the sanctioned games on the field and those off the field run by gangs of hooligans who, as Fiona Clark reports, play by their own set of rules.
According to Russia’s foreign minister, Sergei Lavrov, you can’t blame Russian soccer fans for their violence – they were provoked.

“We cannot ignore the absolutely provocative actions of fans from other countries. You have probably seen the outrageous footage on television, where a Russian flag is being trampled, when insults against the Russian government, against the leading Russian sportsmen are being chanted,” the Sputnik news service quotes Lavrov as saying.

It’s a shame he hadn’t read a copy of the newspaper Komsomolskaya Pravda, as then he would have understood that provocation is apparently part of the hooligans’ game. What to outsiders looks like random attacks by drunk and unruly thugs is apparently all part of a well-organized strategy belonging to a sub-culture of football fanatics – some of whom seem more interested in the fights than the match. They even have their own language, attack plans and financial organizations, called “firms,” supporting them. And they say they learnt it all from the English – after all, for decades, they were the best.

From the 1960s to the early 2000s violence at UK soccer matches was the norm – scuffles, pitches invaded, people beaten and crushed and killed in the melees. The beautiful game went from a pleasant family day out to a weekend nightmare that required the constant banning and fining of clubs to get it under control. Then the fans took the violence on tour, so to speak, creating havoc at away matches abroad. As a result English teams were banned from competing in European matches from 1985 to 1990 after the death of 39 Juventus fans at a match in Brussels. At home, the bans, fines and concerted anti-violence campaigns eventually led to a decline in violence, and club games were deemed safe for families to go to again. These days thugs may still wear identifying clothing like a particular brand of shoes, but the fighting has now mostly moved off pitch to designated meeting points away from the stadiums.

The same is true in Russia. Hooliganism began here a little later but has flourished in recent years with the growth in right-wing nationalism and neo-Nazi groups. Clubs like Dynamo and CSKA are well known for their fan violence and racism. A crackdown on violent outbreaks at games means those spoiling for a fight now arrange brawls at remote locations where they’re out of police range.

But the clubs’ thugs put aside their rivalries when they go abroad, coming together under the umbrella of a “firm” that helps fund their travels, orchestrates their activities and sets the rules of engagement.

The paper describes the structure of the fans and thugs.

First there’s the “kuzmich” – an ordinary football fan, who is not involved with organized bigotry or violence. He would “arrive at Euro 2016 with family or a lover,” and even though he may drink a few beers and chant “Ross-i-ya,” he is deemed “unworthy” by the real thugs.

Next are the “active fans” or “huliganz.” These are fighters who actively participate in what’s known as “action,” “jumps” or “leaps” – a quick attack involving several blows and an equally quick retreat. He’s normally a “young man in good physical shape with great skills in street fighting. He usually wears shorts, comfortable shoes and T-shirts,” the paper says. Importantly, he doesn’t drink before he jumps.

Then there are the much talked about “ultras” – rowdy supporters who often sit behind the goals and are often the central figures in any trouble.

When these groups come together it’s called a “sostav” which means “ingredients” or “composition” – a group of fans gathered ready for action.

They are organized by the “company” or “firm.” It gives the group a name, symbols, funds and guidance, Komsomolskaya Pravda claims.

And when the firm consists of ultras and huliganz from different clubs that are coming together for a single purpose, it’s an “obshchak.”

Putting on the squeeze

The paper says when these groups jump their aim is to destroy the morale of the enemy by “squeezing the rag” – stealing and destroying (usually burning) another team’s symbols or flag. These skirmishes don’t take long either, the paper says. It adds that the signal to retreat is the not very manly phrase when translated – “give up your slippers” – which basically means drop everything and run.

Inside the stadium victory is scored if you can invade and evict the opposition from their seats at the end of the game – as was seen when the Russian thugs invaded the UK’s patch. According to the paper, “in fan circles this is considered the highest chic” – and the action went exactly to plan.

Despite the fact that these outburst of violence have left scores of people injured – some seriously – many in Russia think they’ve been unfairly singled out as thugs and that this is yet another example of the West picking on them. Some members of parliament even supported the violence as though it were just par for the course.

One deputy who is also an executive committee member of the Russian Football Union, Igor Lebedev, tweeted: “I don’t see anything wrong with the fans fighting. Quite the opposite, well done lads, keep it up!”

The former press secretary of the Russian Football Federation, Andrei Malosolov, praised the violence, asking: “Don’t the Russians deserve respect for their fearlessness? They beat the citizens of a country that … has always been an enemy of Russia.”

Russia’s sports minister condemned the violence but mostly because he feared Russia could be banned from future matches or, even worse, lose the 2018 World Cup.

Komsomolskaya Pravda says it was the action inside the stadium that was “a major, and perhaps fatal mistake.”

“Everything that happens in the city is the responsibility of the police. For all the stadium meets, it is UEFA responsibility,” and it will decide on any future bans. “UEFA is not ready for such aggression,” the paper says.

And neither were the Russian thugs English opponents, by the looks of it. Russians boasted on social media that the UK hooligans they had once revered and emulated were now overweight, unfit and drunk – in other words, easy targets. In one of the saddest ways possible, the students had surpassed their masters.

DFB throws its weight behind Ceferin for UEFA’s top post

Tour de France: Who will go the distance?