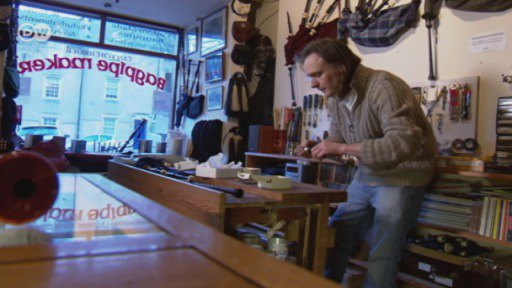 Scotland is keeping a close eye on the UK’s EU referendum – a vote to leave could reignite the issue of Scottish independence. Peter Geoghegan reports from Glasgow.
During the 2014 independence referendum Scotland was awash in political colour. Competing ‘yes’ and ‘no’ posters and stickers seemed to be adorn just about every other window. On polling day, almost 85 percent voted, choosing to remain in the United Kingdom by some 10 points.

With only a few days to go until the referendum on the UK’s membership of the European Union, the political mood in Scotland is very different. There are few flags flying or car stickers urging voters to ‘Leave’ or ‘Remain.’

Although polls suggest Scots are in favor of the EU by a majority of two to one, many experts fear a low turnout on June 23.

“The obsession with Europe that you find in England, you just don’t find in Scotland,” says Michael Keating, professor of politics at Aberdeen University.

“Even Eurospectics in Scotland don’t obsess about Europe. The issue is just not that salient. It is not nearly as polarized,” he told DW.

One of the reasons why Scots are less enthused by the upcoming votes is that their political parties are overwhelmingly pro-EU. While Conservatives in England are bitterly divided over the referendum, and Jeremy Corbyn’s Labour has been reticent, there is near unanimity in the Scottish Parliament in Edinburgh for ‘Remain.’

During a recent debate in Edinburgh all but a handful of parliamentarians backed staying in the European Union. Even the Scottish Conservatives are firmly pro-European, in marked contrast to their Westminster counterparts.

Certainly the big ticket issues for Leave campaigners – particularly immigration and sovereignty – struggle for resonance in Scotland, which is a much whiter place than England and needs immigration to replace an aging workforce. Meanwhile Brussels, and its putative legion of faceless bureaucrats, feels a lot further away from Edinburgh than it does from the south-east of England.

Meanwhile, the anti-EU coalition in Scotland has been hindered by a lack of unity. The Scottish branch of the United Kingdom Independence Party (UKIP) is riven by in-fighting and splits. Onetime SNP deputy leader Jim Sillars – who previously campaigned for ‘independence in Europe’ – is practically the only high-profile nationalist advocating an out vote.

Polls suggest two-thirds of Scots and the vast majority of businesspeople are in favor of the EU.

“We have not had a major war in Europe since the end of World War II. A big part of the reason for that is the European Union,” says 29-year-old environmental scientist, Adrian Moore, who lives in Glasgow.

Like many others, Moore sees strong parallels between the 2014 Scottish independence referendum and the upcoming vote. “The campaigns are incredibly polarized. I would love it if a politician said ‘we should stay, but if we did leave the EU the country would still be here.’ Rather than ‘the world’s going to end,'” he told DW.

Unlike the independence referendum, 16 and 17-year-olds do not have a vote this time around, and neither do EU citizens living in the UK.

“I’ve lived here for 10 years – I should have a chance to vote,” says Marco Weber, originally from Germany but now living in Glasgow. “But if I could vote, I would vote to stay in,” he told DW. “Europe needs to be stronger, not weaker.”

Scots might be less than enthusiastic about the referendum, but the country will be bound by the result regardless.

An English-backed vote to leave could re-open the issue of independence. Polls suggest the nationalists could win if the UK left the European Union. But with questions around currency and economics – which dogged the 2014 referendum – still unresolved, there is limited appetite for another run so soon among the SNP hierarchy.

Even if nationalists were able to triumph, going it alone with England outside the European Union would create significant barriers. An independent Scotland would almost certainly want to join the EU, creating a hard border along the normally sedate Anglo-Scottish boundary.

Conversely, Scottish support for the EU could be enough to overturn a narrow ‘leave’ majority in England, thus keeping the UK inside the European Union. In such a scenario, nationalism south of the border – already on the rise – could surge.

Ironically, given the level of public support for the EU among Scottish nationalists, Brexit would see much of the control of Scottish affairs currently exercised in Brussels – including over fisheries and agriculture – transferred to Edinburgh, not London.

Even if the UK leaves the EU, a nationalist-dominated Scottish parliament could still choose to follow European regulations and legislative changes, even if formally outside the union. “If Scotland wanted to continue playing the European game they could shadow Brussels rather than London even from outside the EU,” says professor Michael Keating.

Most Scots are hoping it does not come to that. Fears about a future outside the European Union could be enough to motivate Scottish voters and that could have a significant bearing on the result – for Scotland, and for the whole of the UK.