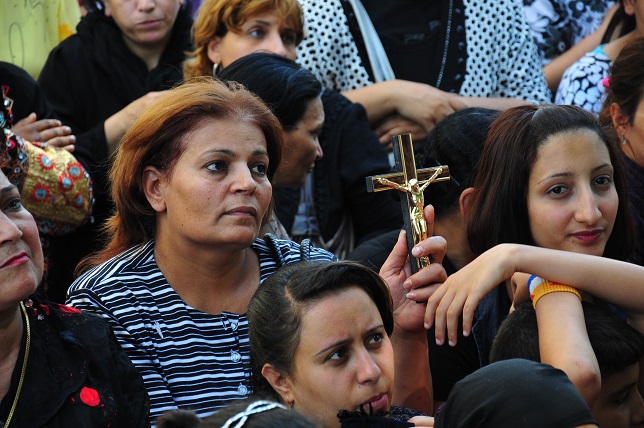 Copts in the village of Qaryat Al Bayda reported Friday they had been subjected to sectarian violence following attacks on the pastor of a local church and a services building affiliated with the church.

The village, located to the south of Alexandria off the Cairo-Alexandria Desert Road, witnessed violent incidents as a group of people destroyed the car of Pastor Karas Nasr of the Coptic Church of the Virgin and the Angel Michael, said local residents.

“Had it not been for the intervention of our sane Muslim brothers, the pastor would have died,” commented Coptic activist Ramy Kashwaa, coordinator of the Maspero Youth Union in Alexandria, providing several Facebook pictures of the events he witnessed. He added that several young people who defended the building were injured.

Kashwaa further told Daily News Egypt Saturday that they could not find any logic behind such behaviour. “The building has always been there, serving more than 80 families in the neighbourhood,” he said.

The assaults allegedly occurred following the spread of a rumour that a Coptic man intends to turn his house into a church, resulting in the assembly of dozens of Muslim residents who chanted against Copts. A video posted by the website Copts United showed hundreds gathered in the village repeatedly chanting “we don’t want a church”.

The attackers moved towards the man’s house after Friday prayers. Kashwaa accused extremist Salafists of initiating the attack.

Naeem Aziz, the house owner, told the website Copts Today that he and his brother were injured in the assaults and, instead of interfering to protect them, security forces let the violence occur and arrested a group of Copts on accusations of planning to illegally construct a church.

Aziz denied the rumour and said he was “only building a new house for his son”. But what Kashwaa found to be striking was the police behaviour. “Six Muslims and six Copts were arrested. The police officer immediately let go of the Muslims and began putting the blame on us, using very vague excuses and explicitly telling us he did not care if we were right, to the extent that one of the injured was denied medical treatment until the police chief arrived,” Kashwaa accounted.

The activist mocked the accusations, saying, “The violent assembly of nearly 1,200 people assaulting Copts and destroying private and public facilities has not even been subject to the Protest Law. We have warned that if no serious penalty is applied to perpetrators, there will be more of these attacks.”

Attacks by extremists on Copts in small villages are not uncommon in Egypt. Furthermore, extremists do not acknowledge the right of Copts to practice their religion and often oppose the construction of their worship houses.

President Abdel Fattah Al-Sisi and the leaders of the Muslim community in Al-Azhar have been speaking of the need to combat religious extremist throughts the renewal of religious discourse, but incidents of sectarian violence and incitement continue.

Although the incident’s claim of “church construction” was false, the Constitution supports an urgent need to issue a law to regulate church construction and renovation in a manner that guarantees the freedom to practice religious rituals for Christians.

The freedom to practice religious rituals and establish places of worship for the followers of Abrahamic religions are rights “regulated by law”, according to the Constitution.

“But we don’t obtain our rights by law,” said Kashwaa. “We often have to recur to public pressure.”